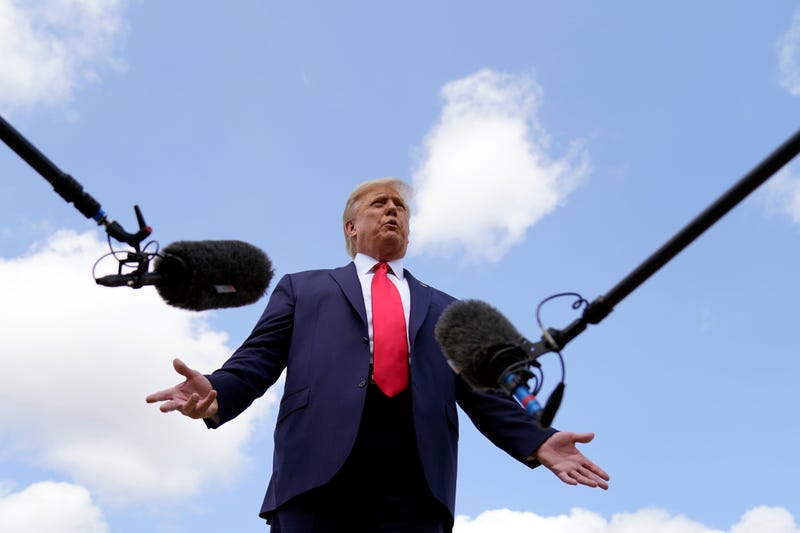 Photo credit President Donald Trump speaks to reporters before boarding Air Force One for a trip to Jupiter, Fla., to speak about the environment, Tuesday, Sept. 8, 2020, at Andrews Air Force Base, Md. He will also travel to a campaign rally in North Carolina. (AP Photo/Evan Vucci)
By The Associated Press

Washington (AP) — President Donald Trump is putting out the word that he is considering spending as much as $100 million of his own fortune on his reelection effort as campaign officials try to buck up key supporters and donors amid daunting polling numbers and other bad news.

Trump said Tuesday that he’s prepared to use his own money and spend “whatever it takes” to win a second term in the White House, but he sidestepped just how much of his own cash he’s willing to invest.

“If I have to, I would,” Trump said of spending his own money. Speaking to reporters before departing for the battleground states of Florida and North Carolina, he added, “We have much more money than we had last time going into the last two months. But if we needed any more, I’d put it up.”

Dan Eberhart, a prominent Republican donor, said that two senior campaign officials told him in recent days that Trump was considering a personal investment in the campaign of as much as $100 million.

Eberhart said the campaign is trying to create “a little excitement” among top donors and prominent supporters as polls have shown Trump consistently trailing Democratic presidential nominee Joe Biden nationally and in some battleground states. Trump also is grappling with the political fallout from the mounting number of coronavirus deaths and the pandemic’s economic toll.

Trump spent more than $60 million of his own money on his 2016 run for the White House. This time, he began raising campaign funds almost immediately after his inauguration and built an enormous war chest early on that advisers believed put him at a distinct advantage over the Democratic nominee.