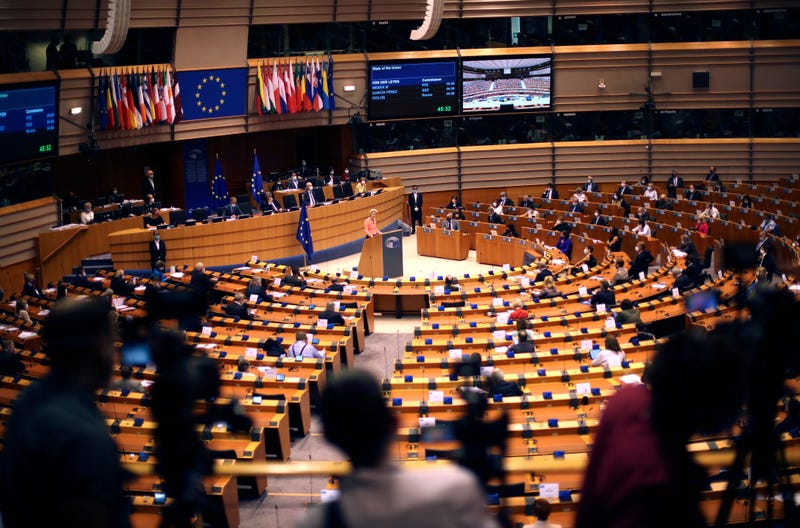 Photo credit European Commission President Ursula von der Leyen addresses the plenary during her first State of the Union speech at the European Parliament in Brussels, Wednesday, Sept. 16, 2020. European Commission President Ursula von der Leyen will set out her vision of the future in her first State of the European Union address to the EU legislators. Weakened by the COVID-19 pandemic and the departure of the United Kingdom, she will center her speech on how the bloc should adapt to the challenges of the future, including global warming, the switch to a digital economy and immigration. (AP Photo, Francisco Seco)
By The Associated Press

BRUSSELS (AP) — European Commission President Ursula von der Leyen said Wednesday that the bloc must rise above its fragmented approach on dealing with the coronavirus by centralizing more decision-making on health issues.

She also told EU legislators that Italy will host a global health summit next year, during its G20 presidency.

Von der Leyen fully acknowledged the fragile state that the pandemic has left EU in, with the death toll closing in on 150,000 and the economy facing the worst slump in the bloc's history.

To counter this, von der Leyen said she wants more money poured into research and development and more powers going to EU-wide institutions like the European Medicines Agency.

“So for me, it is crystal clear we need to build a stronger European health union. It is time to do that," she said.

During the early part of the pandemic, EU member states took independent measures, sometimes at the cost of one another, to contain the virus. Borders were closed, creating massive traffic jams and stranding citizens in other EU nations and beyond.

Quickly, she said, the EU forced through measures to ease the burden.

“When it’s closed borders, we created green lines for goods. When more than 600,000 European citizens were stranded all over the world, the EU brought them back home,” she said.

In the wake of the 1.8-trillion-euro ($2.1 trillion) recovery fund and long-term budget agreed by EU member states over the summer, there was criticism that not enough of the money was going to health issues.

“I had proposed to increase funding. And I’m grateful that this parliament is ready to fight for more funding and remedy the cuts made by the European" summit of government leaders.

Italy was the early hotspot in Europe as the virus spread from China, and Prime Minister Giuseppe Conte welcomed the summit, saying: “We stand united to protect our health and to build a better future for the next generation .”

No precise date was announced.