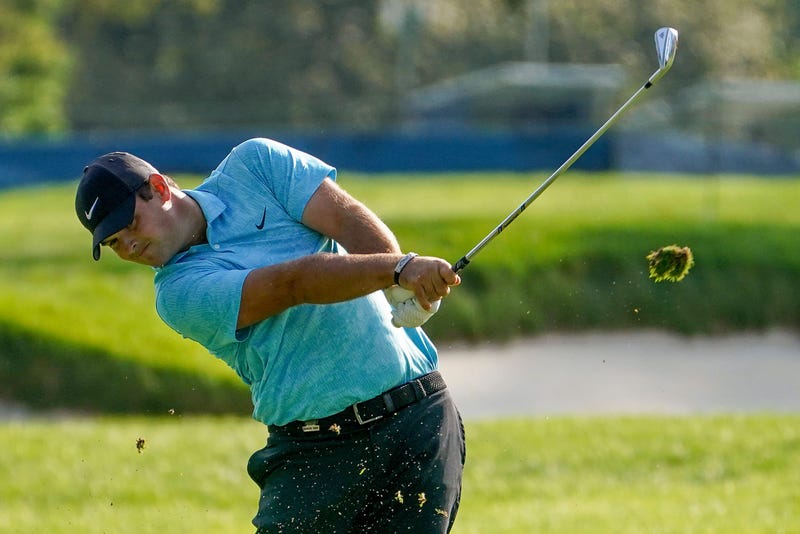 Photo credit Patrick Reed, of the United States, plays a shot off the second fairway during the second round of the US Open Golf Championship, Friday, Sept. 18, 2020, in Mamaroneck, N.Y. (AP Photo/John Minchillo)
By The Associated Press

It’s rare when fans wind up rooting for the golf course, even one as majestic as Winged Foot, but suddenly that’s a viable option. Maybe because the two players atop the leaderboard heading into Round 3 at the U.S. Open are not exactly — how to put this? — the most likeable guys in the game.

Patrick Reed, who leads at 4-under 136, has been hounded by cheating allegations since college. They spilled out in public last December after he was slapped with a two-stroke penalty for intentionally (Reed denied that part) improving his lie in a waste bunker at the World Hero Challenge.

Judging by the lack of fellow pros rushing to Reed’s defense, the 2018 Masters champion wasn’t all that popular to begin with. More aggravating, from the players’ perspective, is that Reed seems to thrive in tough spots like the one he finds himself in at the moment.

Bryson DeChambeau, a shot behind, hasn’t been accused of anything more devious than maddeningly slow play, but give him time. DeChambeau came out on tour in 2016 and made few friends because of his habit of calibrating every shot beforehand — and recounting them in faux-scientific terms afterward — like some kind of Einstein in soft-spikes.

Then last October, DeChambeau added another obsession. He packed on 40 pounds of muscle to hit the ball farther, apparently reasoning all that brawn would come in handy in tournaments where his brains weren’t enough of an edge. He may be onto something.

DeChambeau followed up his opening 69 with a 68 on Friday and was the only player under par in both of the opening rounds.

“If I had to look back on it,” he said, “I would say that this today is a more enjoyable test … because it shows who executed the shots the best, for sure.”

Reed opened with a sizzling 66 and ground out an even par-70 on a day when Winged Foot played up to its reputation — faster and firmer — and the field averaged 75.25.

“It’s almost like they set it up to ease our way into it, and then showed us what it’s supposed to really be like,” Reed said.

The steady 15-mph breezes from the north that wreaked havoc in Round 2 are expected to continue through the weekend, when Tiger Woods (10 over), Phil Mickelson (13 over) and another 80 golfers who missed the cut can find shelter in front of TV sets.

First-round leader Justin Thomas looked like he’d join the rush for the exits before recovering late to post a 73 that left him tied for third alongside Harris English and Rafael Cabrera-Bello at 2 under.

If the past is prologue, almost no one else on the ground at Winged Foot has a realistic shot. All but two of the last 24 U.S. Open champions have been within two shots or better of the lead after 36 holes.

Jason Kokrak, a 35-year-old journeyman who’s alone in sixth place at 1 under, was the only other player in red at the midway point and stealing a major championship would be quite a stretch for a player who hasn’t won even once on tour.

Xander Schauffele, Hideki Matsuyama or Matthew Wolff may yet emerge from a handful of players at even par, and power players like Jon Rahm (+1), Tony Finau (+2) and Dustin Johnson (+3) are all capable of running off enough birdies to have a say about who collects the trophy come Sunday. But that’s about it.

It’s impossible to say who fans would be backing, of course, since there’s only a smattering of volunteers — although there was a Rick Pitino sighting — allowed on the course. Reed was heckled by chants of “cheater” during a playoff at Kapalua last January, prompting some to wonder what kind of reception he’d get from the always irascible New York galleries. DeChambeau’s cockiness might have won some hearts among the “if-you-can-make-it-here” crowd, but we’ll never know.

The one thing you can be sure of is that Winged Foot will be at the center of the drama.

“The wind can make a par-3 course difficult, so put that on a U.S. Open setup, it’s going to be even more so,” Schauffele said. “It’ll be a fun afternoon to watch on TV.”