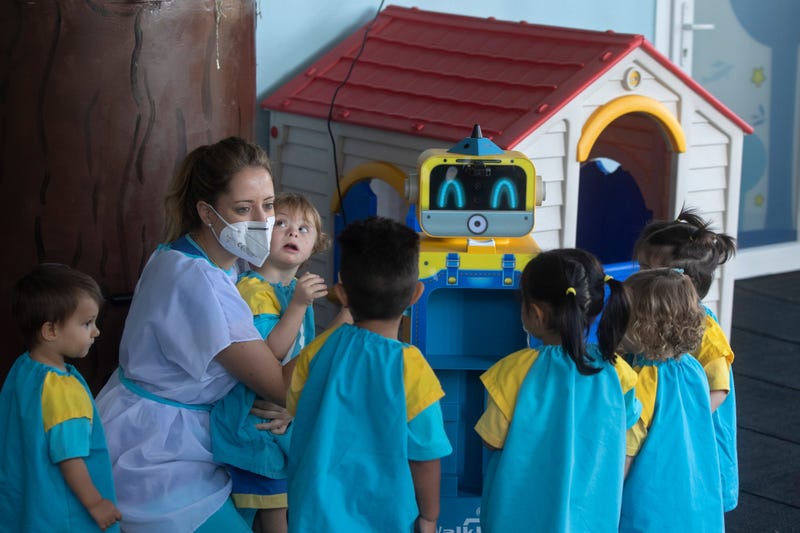 Photo credit FILE - In this Friday, Sept. 4, 2020 file photo, a teacher demonstrates a robot that takes the temperature of children and displays it on a screen in a kindergarten in Madrid, Spain. Pupils under 3 years-old in the Spanish capital head to kindergartens on Friday, the first in-person school activity since the country imposed a strict lockdown in mid-March due to the Covid-19 pandemic. As cases continue to go up and fuel the debate over the return to schools in parents' group messaging chats, Spanish authorities last week issued revised guidelines for the reopening. They included making mandatory masks for students of age six or older, daily body temperature checks, hand-washing at least five times per day and frequent ventilation of classrooms. But many parents say that funding is insufficient to hire more teachers and that some schools just don't have additional space. (AP Photo/Paul White, File)
By The Associated Press

BARCELONA, Spain (AP) — Ángela López hardly fits the profile of a rule-breaker. But the mother of a 7-year-old girl with respiratory problems has found herself among parents ready to challenge Spanish authorities on a blanket order to return to school.

They are wary of safety measures they see as ill-funded as a new wave of coronavirus infections sweeps the country. They fear sick students could infect relatives who are at higher risk of falling ill from COVID-19. And they claim that they have invested in computers and better network connections to prepare for online lessons, even preparing to homeschool their children if necessary.

Many of the defiant parents, including López, are also ready to stand up to the country’s rigid, one-size-fits-all rule of mandatory in-school education, even if that means facing charges for truancy, which in Spain can be punished with three to six months in prison.

Her daughter was born with a condition that makes her prone to suffer episodes of bronchial spasms, which can cause difficulty breathing. With COVID-19 affecting the respiratory system, López doesn’t want to take any risks.

“We feel helpless and a little offended. It’s like they force us to commit an illegal act because they don’t give us a choice,” said López, who lives in Madrid.

“It’s a matter of statistics," she added. "The more cases there are, the more likely you are to catch it.”

More than half a million people have contracted the virus in Spain and at least 29,500 have died with it, although the official record leaves out many who perished in March and April without being previously tested.

With an average of 229 new cases per 100,000 inhabitants over the past two weeks, Spain currently has the highest rate of contagion in western Europe. Within the region, it leads what many experts are already calling a second wave of the pandemic, although the Spanish government insists that it now identifies most of the infections because it’s testing more and better.

Officials also say that more than half of those infected now show no symptoms, which explains why hospitals that struggled at the peak of the epidemic in spring are seeing fewer COVID-19 patients this time.