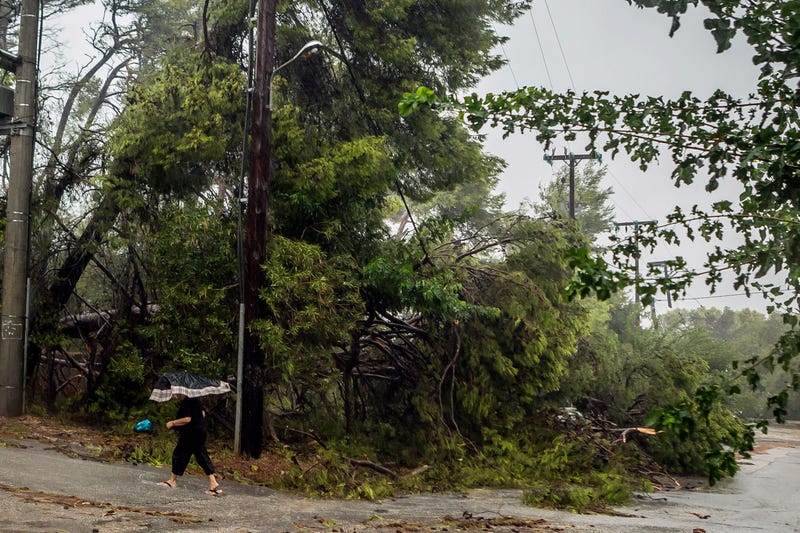 Photo credit A woman uses an umbrella as she passes next to fallen trees during a storm at the port of Argostoli, on the Ionian island of Kefalonia, western Greece, Friday, Sept. 18, 2020. A powerful tropical-like storm named Ianos battered the western islands of Zakynthos, Kefalonia, and Ithaki overnight, causing flash flooding, property damage, power outages, and road closures mostly from downed trees, police and local authorities said. (AP Photo/Nikiforos Stamenis)
By The Associated Press

Authorities identified the two victims as an elderly woman found dead in her flooded home in the region of Thessaly and a 63-year-old shepherd swept away by rising floodwaters. They also said a woman who is missing ignored instructions by firefighters and police not to drive into an area where a bridge spans a river.

The country’s firefighting service said Saturday that it had fielded almost 2,500 calls from trapped residents in central and western Greece or about removing fallen trees that were blocking roads.

Water from a river that burst its banks damaged at least two bridges and several buildings, including the local health center in the Thessaly town of Mouzaki, which collapsed. Parts of the stricken area were without electricity.

The storm is projected to move on to the Greek islands, including Crete, shortly.