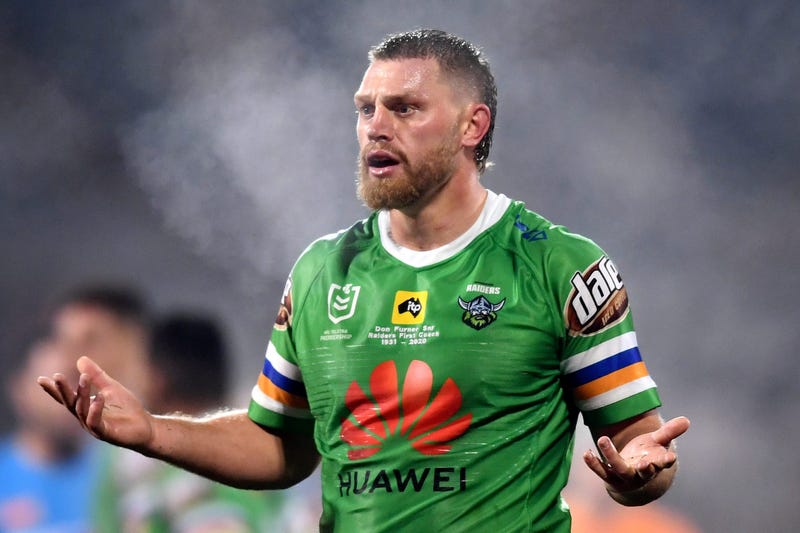 Photo credit Elliott Whitehead of the Canberra Raiders National Rugby League team raises his arms after his try was disallowed during a match against the Melbourne Storm in Canberra, Australia, July 11, 2020. Chinese telecom giant Huawei announced on Monday, Aug. 31, 2020, it is ending its oldest major sporting sponsorship deal in the world when it ends its contract with the Canberra Raiders after nine years, blaming a "continued negative business environment." (Lukas CochAAP Image via AP)
By The Associated Press

CANBERRA, Australia (AP) — Chinese telecom giant Huawei is ending its oldest major sporting sponsorship deal, saying Monday it was breaking its contract with an Australian rugby league team after nine years because of a “great trade war” between China and Australia.

Australia has barred the world’s largest maker of switching gear and major smartphone brand from involvement in crucial national communication infrastructure in recent years, while China has ratcheted up pressure for an Australian policy reversal.

“Unfortunately as everyone knows, Huawei has been caught in the middle of a great trade war and the effects on our business is greater than we expected,” Huawei Australia’s chief corporate affairs officer Jeremy Mitchell told reporters.

Huawei will end its current financial backing of the Canberra Raiders at the end of the current National Rugby League season, because of the “negative business environment” in Australia, Mitchell said. The grand final is on Oct. 25.

Huawei will continue as one of the minor sponsors, as the team searches for a replacement major sponsor.

“We would’ve loved to have stayed for another nine years or 10 years, but the business environment in Australia is very hard for a Chinese company,” Mitchell said.

The Raiders is the only team in the national competition based in the Australian capital, the center of government and national policy-making.

Last year, Huawei had renewed its sponsorship deal for two years until the end of the 2021 season.

Huawei’s landmark decision to sponsor the team in 2012 came months after the government banned the company on security grounds from involvement in the rollout of Australia’s National Broadband Network in 2011.

The sponsorship was seen as an attempt to improve Huawei’s public image in the eyes of lawmakers and senior bureaucrats who barrack for the Canberra team.

Raiders board member Dennis Richardson, a former head of the Defense Department and of the main domestic spy agency, Australian Security Intelligence Organization, had been a vocal supporter of Huawei’s sponsorship deal.

Mitchell said the government’s decision in 2018 to ban Huawei from Australia’s 5G networks had had a major economic impact.