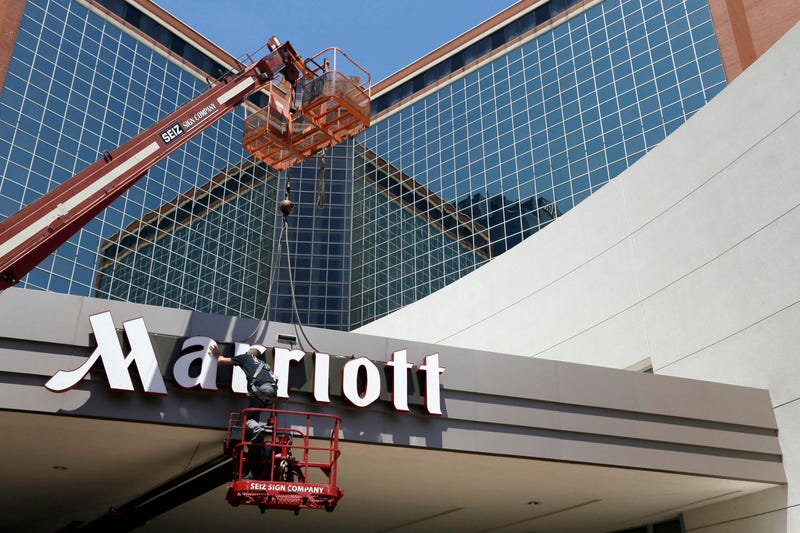 Photo credit FILE - In this Tuesday, April 30, 2013, file photo, a man works on a new Marriott sign in front of the former Peabody Hotel in Little Rock, Ark. Marriott says its business is steadily improving, Monday, Aug. 10, 2020, with 91% of its hotels now reopen and business travel reemerging in China. (AP Photo/Danny Johnston, File)
By The Associated Press

On land and sea, the travel industry is hurting but holding out hope for a recovery.

Marriott said Monday it has reopened most of its hotels around the world, helped by a rebound in business travel in China. The average occupancy at its hotels is also improving, although still at depressed levels.

The hotel giant’s CEO voiced optimism that the worst damage from the pandemic is over. The damage in the second quarter was clear: Marriott lost $234 million, as revenue its plunged 72%.

In another corner of the travel industry, Royal Caribbean posted a $1.64 billion loss as cruise ships remained anchored in port.

Both results were worse than Wall Street expected.

Investors, however, appeared to focus on upbeat comments by executives: In afternoon trading, shares in Bethesda, Maryland-based International Inc. were up more than 3%. Those of Miami-based Royal Caribbean Cruises Ltd. gained 10%.

“A lot of people have written off this summer. They have decided that there isn’t going to be a big summer vacation for all of the reasons that we know,” Michael Bayley, CEO of the Royal Caribbean Cruises affiliate, told analysts. “But people certainly want to have a vacation next year, and I’m kind of hopeful that we’re going to see a nice bump in 2021.”

Hotels, cruise lines and airlines are suffering as travel restrictions and fear of contracting COVID-19 have caused many people to stay home. While leisure travel has recovered slightly from April lows, lucrative business travel has been especially hard hit and is expected to take longer to recover.

Marriott said it is beginning to see signs of a rebound in China, which accounts for about 9% of its business.

CEO Arne Sorenson said Marriott has seen “rapid improvements” in hotel occupancy and new bookings there. He said on a call with analysts that China might approach 2019 occupancy and revenue trends as soon as next year, even with limited foreign visitors.

In the United States, leisure travel to resort areas has picked up, even with the recent surge of reported coronavirus cases in many states and is likely to continue through Labor Day and possibly beyond, Sorenson said.

“We are optimistic that the second quarter will mark the bottom and that the worst is now behind us,” he said.

Marriott’s net loss compared with a profit of $232 million in last year’s second quarter. Excluding one-time items, the loss was 64 cents per share. Analysts surveyed by FactSet expected a loss of 41 cents per share. Revenue plummeted to $1.5 billion, also below analysts’ projections.

Royal Caribbean Group’s adjusted loss was $6.13, compared with analysts’ average forecast of a loss of $4.82 per share.

The company, which owns Celebrity Cruises and others besides its namesake line, said the suspension of sailings that began in March and will continue through October has badly hurt bookings for the rest of 2020. However, next year’s bookings are “trending well” and “within historical ranges,” the company said.

Royal Caribbean has raised billions in debt and slashed expenses to hang on until cruising returns. Still, the company is burning through $250 million to $290 million a month.