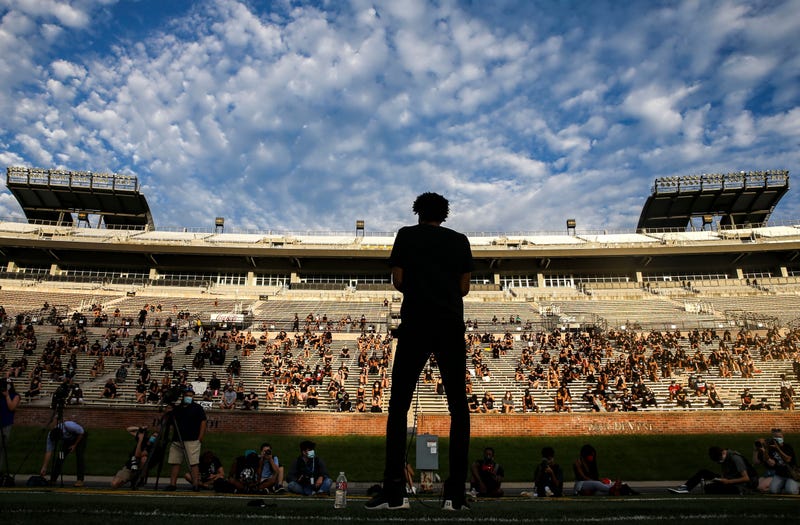 Photo credit Track athlete Cason Suggs speaks about his experiences as a Black man in Memorial Stadium following a march to protest social injustices through the University of Missouri campus in Columbia, Wednesday, Sept. 2, 2020. University of Missouri athletes who organized and led the march and rally urged the hundreds of people who participated to stay engaged in work to end racial disparities. (Colter Peterson/St. Louis Post-Dispatch via AP)
By The Associated Press

COLUMBIA, Mo. (AP) — University of Missouri athletes who organized and led a march and rally for social justice through the Columbia campus urged the hundreds of people who participated to stay engaged in work to end racial disparities.

Wednesday's “March With Mizzou” was organized largely by the Mizzou Black Student Athlete Association, a group that formed during the summer amid nationwide demonstrations for social equality.

The group's president, Cason Suggs, a junior on the school's track and field team, told the crowd in Memorial Stadium after the march that discussions he's had about creating change often focus on “Band-Aid” moments. But he said people should think of fighting racism as physical therapy.

“Therapy is long, and it is difficult,” Suggs said. “But a good trainer will come up to you and say, ’Listen, it’s going to be a difficult task. It’s not going to be anything simple ... . But our goal is that when you leave here, you’re better than you were when you came in.'”

Keirra Slack, a junior soccer player who is vice president of the Black athletes group, said “I am tired” of hearing about the deaths of Black people at the hands of police.

“I am exhausted of seeing my brothers and sisters killed senselessly,” Slack said. “I want society to recognize that this is a human rights issue. It is not political. This is about respect. This is about inclusion.”

The march followed a decision last Friday the the Missouri football team to cancel practice to hold discussions on social justice issues and plans for further actions following the police shooting of Jacob Blake, a Black man, in Wisconsin. The football team held its own march in June to the Boone County Courthouse, where 62 athletes registered to vote.

Kobie Whiteside, a defensive lineman, said the team has several plans for future efforts and could potentially collaborate with the Mizzou Black Student Athlete Association.

“It just set a step,” Whiteside said of last Friday’s cancellation and Wednesday's march. “Just step by step; set a brick here, a brick there to help build a foundation to something.”