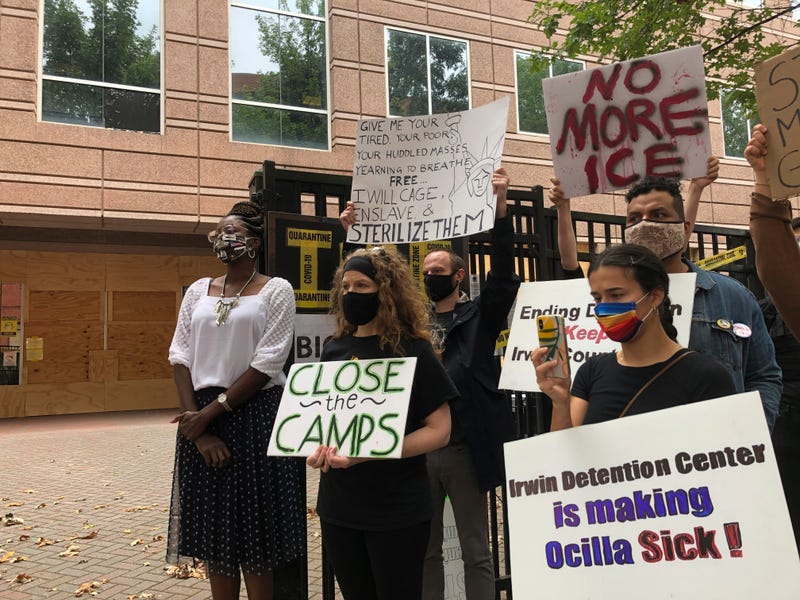 Photo credit FILE - In this Tuesday, Sept. 15, 2020, file photo, Dawn Wooten, left, a nurse at Irwin County Detention Center in Ocilla, Georgia, speaks at a news conference in Atlanta protesting conditions at the immigration jail. An Associated Press review of medical records for four detained immigrant women at the detention center and interviews with lawyers have revealed growing allegations that a gynecologist performed surgeries that the women never sought or didn’t fully understand. (AP Photo/Jeff Amy, File)
By The Associated Press

HOUSTON (AP) — Sitting across from her lawyer at an immigration detention center in rural Georgia, Mileidy Cardentey Fernandez unbuttoned her jail jumpsuit to show the scars on her abdomen. There were three small, circular marks.

The 39-year-old woman from Cuba was told only that she would undergo an operation to treat her ovarian cysts, but a month later, she's still not sure what procedure she got. After Cardentey repeatedly requested her medical records to find out, Irwin County Detention Center gave her more than 100 pages showing a diagnosis of cysts but nothing from the day of the surgery.

“The only thing they told me was: ‘You’re going to go to sleep and when you wake up, we will have finished,'" Cardentey said this week in a phone interview.

Cardentey kept her hospital bracelet. It has the date, Aug. 14, and part of the doctor’s name, Dr. Mahendra Amin, a gynecologist linked this week to allegations of unwanted hysterectomies and other procedures done on detained immigrant women that jeopardize their ability to have children.

An Associated Press review of medical records for four women and interviews with lawyers revealed growing allegations that Amin performed surgeries and other procedures on detained immigrants that they never sought or didn't fully understand. Although some procedures could be justified based on problems documented in the records, the women's lack of consent or knowledge raises severe legal and ethical issues, lawyers and medical experts said.

Amin has performed surgery or other gynecological treatment on at least eight women detained at Irwin County Detention Center since 2017, including one hysterectomy, said Andrew Free, an immigration and civil rights lawyer working with other attorneys to investigate medical treatment at the jail. Doctors are helping the attorneys examine new records and more women are coming forward to report their treatment by Amin, Free said.

“The indication is there's a systemic lack of truly informed and legally valid consent to perform procedures that could ultimately result — intentionally or unintentionally — in sterilization,” he said.

The AP's review did not find evidence of mass hysterectomies as alleged in a widely shared complaint filed by a nurse at the detention center. Dawn Wooten alleged that many detained women were taken to an unnamed gynecologist whom she labeled the “uterus collector” because of how many hysterectomies he performed.

The complaint sparked a furious reaction from congressional Democrats and an investigation by the Department of Homeland Security’s inspector general. It also evoked comparisons to previous government-sanctioned efforts in the U.S. to sterilize people to supposedly improve society — victims who were disproportionately poor, mentally disabled, American Indian, Black or other people of color. Thirty-three states had forced sterilization programs in the 20th century.

But a lawyer who helped file the complaint said she never spoke to any women who had hysterectomies. Priyanka Bhatt, staff attorney at the advocacy group Project South, told The Washington Post that she included the hysterectomy allegations because she wanted to trigger an investigation to determine if they were true.

“I have a responsibility to listen to the women I’ve spoken with,” Bhatt told the AP on Friday. She said one woman alleged that she was repeatedly pressured to have a hysterectomy and that authorities said they would not pay for her to get a second opinion.

Amin told The Intercept, which first reported Wooten's complaint, that he has only performed one or two hysterectomies in the past three years. His attorney, Scott Grubman, said in a statement: “We look forward to all of the facts coming out, and are confident that once they do, Dr. Amin will be cleared of any wrongdoing.”

Grubman did not respond to new questions Thursday.

In a statement Friday, ICE Acting Director Tony Pham said: “If there is any truth to these allegations, it is my commitment to make the corrections necessary to ensure we continue to prioritize the health, welfare and safety of ICE detainees.”

LaSalle Corrections, which operates the jail, said in a statement that it “strongly refutes these allegations and any implications of misconduct.”

Women housed at Irwin County Detention Center who needed a gynecologist were typically taken to Amin, according to medical records provided to the AP by Free and lawyer Alexis Ruiz, who represents Cardentey. Interviews with detainees and their lawyers suggest some women came to fear the doctor.

Records reviewed by the AP show one woman was given a psychiatric evaluation the same day she refused to undergo a surgical procedure known as dilation and curettage. Commonly known as a D&C, it removes tissue from the uterus and can be used as a treatment for excessive bleeding. A note written on letterhead from Amin's office said the woman was concerned.

According to a written summary of her psychiatric evaluation, the woman said, “I am nervous about my upcoming procedure."

The summary says she denied needing mental health care and added: “I am worried because I saw someone else after they had surgery and what I saw scared me."

The AP also reviewed records for a woman who was given a hysterectomy. She reported irregular bleeding and was taken to see Amin for a D&C. A lab study of the tissue fou