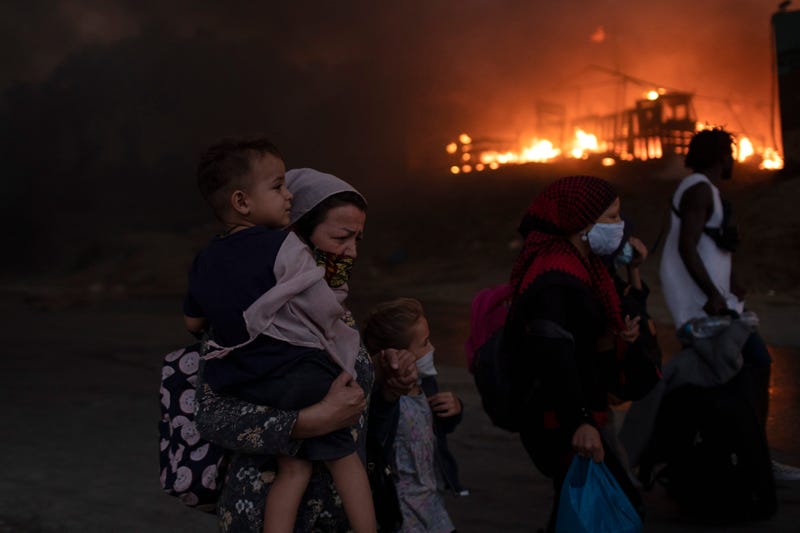 Photo credit Migrants flee from the Moria refugee camp during a second fire, on the northeastern Aegean island of Lesbos, Greece, on Wednesday, Sept. 9, 2020. Fire struck again Wednesday night in Greece's notoriously overcrowded refugee camp on the island of Lesbos, a day after a blaze swept through it and left thousands in need of emergency shelter. The fires caused no injuries, but they renewed criticism of Europe's migration policy. (AP Photo/Petros Giannakouris)
By The Associated Press

ATHENS, Greece (AP) — Fire struck again Wednesday night in Greece's notoriously overcrowded refugee camp on the island of Lesbos, a day after a blaze swept through it and left thousands in need of emergency shelter. The fires caused no injuries, but they renewed criticism of Europe’s migration policy.

Wednesday night's fires broke out inside the parts of Moria camp that had not burned in the first blaze, sending people streaming from the camp with their belongings, according to an Associated Press photographer in the area.

Later, about 4,000 migrants who had left the camp for the island's main port of Mytilini to board ships for the mainland threw stones at police blocking the road, and officers responded with tear gas, police said. There were no reports of injuries or arrests. Police said migrants also lit fires in fields near the site of the clashes.

Moria had been under a coronavirus lockdown when the first fire gutted a large section of it, and health officials said some of those who had tested positive for the virus had fled.

“The combination of migration and the pandemic in these conditions is creating an exceptionally demanding situation,” Alternate Migration Minister Giorgos Koumoutsakos said. Civil protection authorities declared a four-month state of emergency for public health reasons on Lesbos.

Officials said the original fire was started by camp residents angered by the lockdown measures and isolation orders imposed after 35 people tested positive for COVID-19. The cases were found during broad testing and contact tracing after the illness of a Somali man who had been granted asylum and had left the island in July but later returned.

The exact cause of the first blaze was being investigated, but “what is certain is that the fire was started, because of the quarantine, by asylum-seekers in the facility,” said Migration Minister Notis Mitarachi, who flew to Lesbos with Greece’s interior minister and the head of the public health organization.

“Instances of unlawful behavior such as the ones we experienced yesterday will not be left unpunished,” Mitarachi said. “Such behavior is not acceptable, and also respect for law and order is a necessary precondition for the asylum process.”

In dramatic scenes early Wednesday, men, women and children fled fires that broke out during the night at multiple points and were fanned by gale-force winds. Firefighters said protesting camp residents hampered their efforts to put out the blaze.

Aid agencies have long warned of dire conditions at Moria, where more than 12,500 people live in and around a facility built to house just over 2,750. The camp — housing those fleeing violence and poverty in the Middle East, Africa and Afghanistan — has become a symbol of what critics say is Europe’s failure to humanely handle the migration and refugee situation.

Mitarachi said the first blaze left about 3,500 camp residents homeless, noting the fire destroyed administration buildings and a health facility, but only one section of living quarters.

Those left homeless will be housed temporarily in tents flown to the island, and aboard a ferry and two navy ships.

About 400 unaccompanied children and teenagers living in the camp were being flown to other facilities in northern Greece. A first charter flight with 165 passengers reached the northern city of Thessaloniki late Wednesday, while two more were due to land in Thessaloniki early Thursday. All the minors were to be placed in quarantine in the new facilities.

“However, nothing can become an excuse for violent reaction to health checks. And, more so, for unrest of this extent,” Mitsotakis said.

The prime minister added: “The situation in Moria cannot continue because it constitutes simultaneously a question of public health, humanity and national security.”

Aid organizations and rights groups renewed criticism of Europe's migration policy, which they said led to situations like the dramatic conditions of Moria.

Council of Europe Commissioner for Human Rights Dunja Mijatović noted similarly overcrowded conditions on other Greek islands and said the situation could degenerate there too.

The fire shows the urgency of rethinking Europe’s approach to migration, “which has led to the overcrowded, inhumane and completely unsustainable situation in Moria and elsewhere on the Aegean islands,” Mijatovic said.

"As the EU Pact on Migration and Asylum is finalized, this is a timely indictment of the current policy of camps and containment,” she said.

Under a 2016 deal between the European Union and Turkey designed to stem the flow of hundreds of thousands of migrants and refugees, those arriving on Greek islands like Lesbos from the nearby Turkish coast are held there pending either deportation back to Turkey or the acceptance of their asylum claims.

Although the deal dramatically reduced the flow, delays in processing asylum claims and the continued arrival of hundreds of asylum seekers led island camps to quickly exceed their capacity. Successive Greek governments have urged other European countries to share the burden.

“The problem of the handling of migration flows is, after all, mainly a European one,” Mitsotakis said, noting Athens was in constant contact with European authorities on the issue. “Greece has already borne a far heavier burden than its share.”

European authorities, who have often been criticized for not doing enough to ease the migration