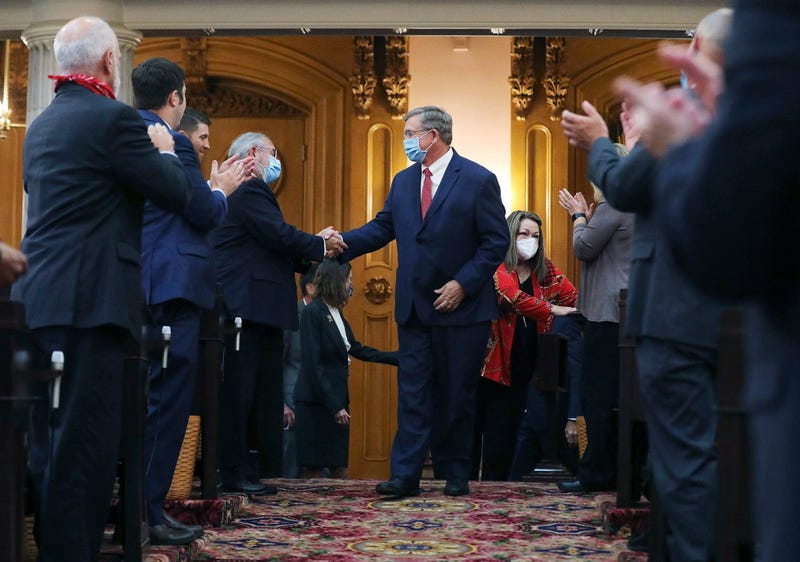 Photo credit FILE - In this file photo from July 30, 2020, Ohio state Rep. Bob Cupp, center, is congratulated after being elected Speaker of the House at the Ohio Statehouse in Columbus, Ohio. Cupp begins to lead the Ohio House as members of his party tout him as the "last Boy Scout" and his opponents see him as complicit in the same "corrupt" activity that has plagued former speakers of the chamber. (Fred Squillante/The Columbus Dispatch via AP, File)
By The Associated Press

COLUMBUS, Ohio (AP) — There were some whispers among members of the Republican caucus that Bob Cupp should be the person to lead the Ohio House. It was 2018. The federal investigation into the previous House speaker had left the dais empty for months and the chamber at a standstill.

But Cupp, who has served in all three branches of state government, demurred. It wasn't the right time.

Fast forward two years and two House speakers, Cupp's moment had arrived. The conservative Republican and former Ohio Supreme Court justice was elected July 30 to lead the House in what the state Attorney General says will be “the greatest challenge of his career."

The House speaker remains one of the most powerful political posts in state government. The speaker has the ability to block or move legislation, in addition to helping determine how the state spends billions of dollars earmarked for health care, education, criminal justice and other government programs.

Cupp takes control of the House during an unprecedented moment of division and tribulation for the presidential battleground state, and therefore the nation, less than two months from Election Day. His predecessor, fellow GOP state Rep. Larry Householder, was indicted this summer on federal bribery charges in what prosecutors called the ‘largest bribery, money-laundering scheme’ in state history.

Cupp, a 69-year-old anti-abortion, pro-gun rights conservative, took Householder’s seat by one vote in the GOP-controlled House, with every single Democrat and a few Republicans voting against him. All the other candidates to replace Householder were also white, Republican men.

Following Cupp’s election, colleagues and supporters of him joined in an unofficial campaign, nominating him as “the last Boy Scout” in Ohio politics. He was praised as “an elder statesman," as “studious and diligent” and as having “unimpeachable character.”

Ohio Attorney General Dave Yost shared anecdotes about Cupp’s dedication to growing his own heirloom tomatoes in February so that he can enjoy them come June. His wife Libby, a retired educator, whom he met while attending a convention for College Republicans, showed photos of the three l