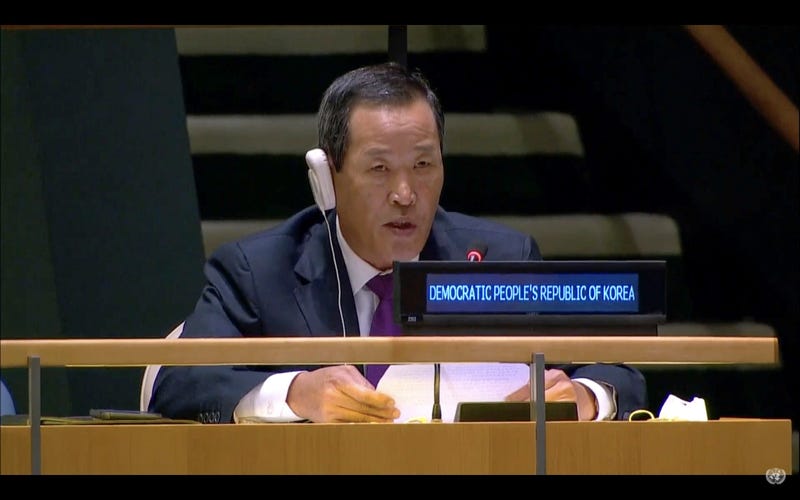 Photo credit In this UNTV image, Kim Song, Permanent Representative of the Democratic People's Republic of Korea (DPRK) to the United Nations, speaks in person during the 75th session of the United Nations General Assembly, Tuesday, Sept. 29, 2020, at U.N. headquarters. (UNTV via AP)
By The Associated Press

North Korea on Tuesday called on the world's governments to “display effective leadership” in the fight against COVID-19 and said its own measures against the pandemic, which it called “preemptive, timely and strong,” ensured it had the threat “under safe and stable control."

Kim Song, the country's U.N. ambassador, said a tightly administered anti-pandemic effort in his nation had been working. North Korea strictly regulates foreign visitors — even more so during the pandemic that's killed more than 1 million people worldwide — and filters all information through its state propaganda apparatus, with details about its approach to the coronavirus relatively scant.

"(The) anti-epidemic situation in our country is now under safe and stable control,” the ambassador said in a rare live address at the U.N. General Assembly.

“A series of state measures are now being taken to block the virus inflow into the country, and all people adhere strictly to anti-epidemic regulations while maintaining the highest alert,” he said.

Further, Kim said the government “will not tolerate even a smallest bit of slackness or concession, but further strengthen the state emergency anti-epidemic measures until the danger of the pandemic inflow is completely eliminated."

Until Tuesday, all speeches at the U.N. General Assembly over the past week were virtual, delivered by world leaders in prerecorded videos from their home nations. The meeting concluded with a smattering of speeches by lower-level officials who are based at the United Nations — including Kim.

He did not mention U.S. President Donald Trump or the United States directly. But Kim spoke of “the maneuvers of hostile forces” in general — a frequent euphemism for the United States and South Korea — and condemned the U.S. trade embargo against Cuba as “economic genocide.”

North Korean leader Kim Jong Un, the third generation of his family to rule the nation, had not been expected to address the U.N. this year. Kim Song also addressed the General Assembly last year.

Trump and Kim Jong Un have met three times since embarking on their high-stakes nuclear diplomacy in 2018. But negotiations have stalled since their second summit in February 2019 in Vietnam, where the Americans rejected North Korea’s demands for major sanctions relief in exchange for a piecemeal deal toward partially surrendering its nuclear capabilities.

The leaders met for a third time that year in June at the border between North and South Korea and agreed to resume negotiations. But a working-level meeting in Sweden broke down months later over what the North Koreans described as the Americans’ “old stance and attitude.”

The North in recent months has repeatedly stated it would never again gift Trump with high-profile meetings he could boast of as foreign policy achievements unless it gets something substantial in return. Most experts say North Korea is likely to avoid serious negotiations with the Trump administration before the November presidential election because there's a chance U.S. leadership could change.

Kim Song also peppered his speech Tuesday with the types of things that North Korea often says about its international relations — that, in his words, “the nuclear threat on DPRK continues unabated along with all sorts of hostile acts taking place before the very eyes,” using the abbreviation for his country’s formal name, the Democratic People’s Republic of Korea.

"In the present world, where high-handedness based on strength is rampant, genuine peace can only be safeguarded when one possesses the absolute strength to prevent war itself," the U.N. ambassador said.

Kim Jong Un is struggling to keep afloat an economy ravaged by U.S.-led sanctions over his nuclear weapons program, border closures amid the pandemic and devastating summer floods that will likely worsen the country’s food shortages.

In a glimpse into some of those struggles against natural calamity, Kim Song said, "Although we suffered considerable losses due to unexpected natural disasters this year, we are vigorously striving to remove the flood and typhoon damages by ourselves and stabilize the people’s life in a short period of time."

During a high-level political conference in August, Kim Jong Un showed unusual candor by acknowledging that his plans to improve the economy aren’t succeeding as the ruling Workers’ Party scheduled a rare congress in January to set development goals for the next five years.

It’s possible Kim could use the congress, which would take place after the U.S. election, to announce a new foreign policy approach toward Washington and Seoul, experts say.

Kim Tong-hyung covers the Koreas from Seoul for The Associated Press. Ted Anthony was AP's Asia-Pacific news director from 2014 to 2018.