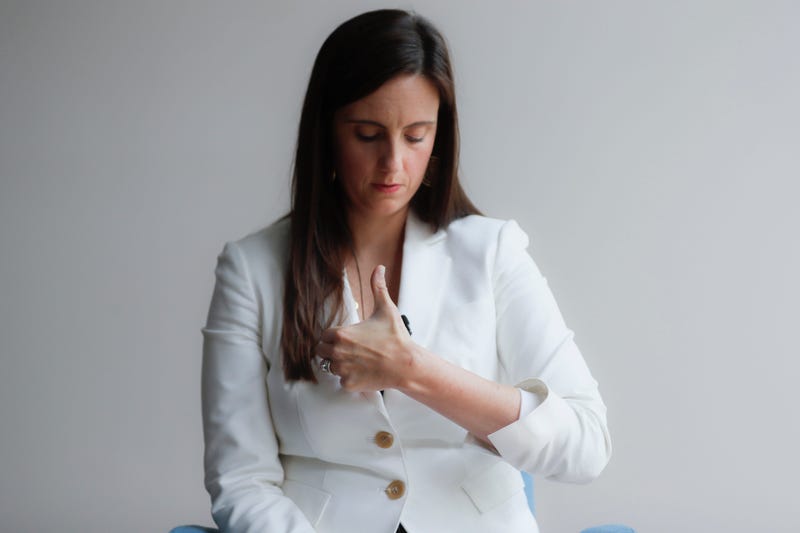 Photo credit FILE- In this Aug. 12, 2019 file photo, Whitney Austin, a survivor of a Sept. 6, 2018 Cincinnati bank shooting that claimed three other lives and wounded another person, demonstrates the newly required ability to give a "thumbs up,” during an interview in Cincinnati. Although Austin has made impressive gains in her recovery from 12 close-range gunshots, progress in the former bank executive’s new life’s mission of combatting gun violence has been slowed by the pandemic. (AP Photo/John Minchillo, File)
By The Associated Press

CINCINNATI (AP) — While Whitney Austin has made impressive gains in her recovery from 12 close-range gunshots, progress in the former bank executive’s new life’s mission has been slowed by the pandemic.

Frustrated over increases in gun violence in recent months and lack of movement on gun ownership reform legislation, she remains active and dedicated to helping achieve change. Her Whitney/Strong Foundation will stage a second annual benefit gala this month, although virtually this time, with a combination of shooting survivors and artists.

Austin, meanwhile, can celebrate the apparent end of her surgeries a few months ago and having a right arm that is finally metal-free, and as a result, ache-free.

And that she survived the Sept. 6, 2018, Fifth Third Bank shooting that claimed three other lives and wounded another person.

“I still see all my scars; it’s impossible to forget that it happened to me,” said Austin, who still lacks full movement in her right arm and retains some numbness in her left thumb and elsewhere. “But most of what it impacts on my body, it’s totally things I can live with.”

She has made public recorded interviews with the Cincinnati Police officers who rescued her, killing the gunman in a hail of gunfire and getting her to medical aid quickly, this month. Now 39, she called for first responders to save her for her children, now 7 and 9.

“I got what I wanted out of that moment,” she said in a recent AP interview. “I got to come back home to my children and to my husband (Waller) and I somehow miraculously found a way to professionally live a life of purpose as a way to give back.”

She still avoids viewing news footage of gun violence, and the sound of fireworks can upset her. After coming so near death, the deadly coronavirus can be unsettling.

“COVID is such a weird thing; even someone who has survived a mass shooting is not immune to COVID,” she said, explaining she worries about her family's health safety.

She also is saddened as cities such as her hometown of Louisville and former workplace town of Cincinnati endure increased homicides during the pandemic. Louisville has been one of the centers of U.S. racial injustice protests, after the police shooting of Breonna Taylor during a no-knock raid this year. One of her foundation supporters, a gun violence victim, had been treated by Taylor, a medical worker.

Pandemic precautions have prevented much of the face-to-face lobbying the former vice president at Cincinnati-based Fifth Third Bank had been doing on gun reforms. But she's encouraged that Ohio Gov. Mike DeWine is still pushing for the Strong Ohio package he introduced in the aftermath of an Aug. 4, 2019, mass shooting that killed nine people in Dayton, Ohio.

“I'm working with the governor's office as an instigator,” she said. “I had been doing that and I will continue to push to get this done.”

DeWine, a Republican, emphasized his ongoing support for legislation like the Strong Ohio bill while preserving Second Amendment rights.

“Whitney’s bravery is admirable, and I’m grateful for her steadfast support of this legislation and all of her tireless work to prevent gun violence,” DeWine said in a statement. “I look forward to continuing our work with the legislature to both shield citizens from danger and safeguard constitutional rights.”

Austin echoed the governor's sentiment that her efforts aren't against gun ownership, but for reducing gun violence including accidental shootings. Her organization works with gun sportspeople and helps train people in gun safety, suicide prevention, and first aid to stop bleeding. It's helped get thousands of gun locks distributed.

Because the second shooting anniversary falls on Labor Day weekend and Kentucky Derby day, the “A Night For Life” foundation benefit will be Sept. 25.

“We anticipate that employees will commemorate the solemn anniversary in ways that are meaningful to them,” Laura Trujillo said by email.

Austin said on Sunday, she will reflect on gunshot victims, survivors and their families: “My thoughts and prayers will be with everyone.”

sports
Wayne Gretzky resells mansion that once belonged to Lenny Dykstra for $17.6 million
sports
Alex Rodriguez ownership group has not closed deal on Timberwolves purchase yet
sports
Fernando Tatis Jr. back on IL after testing positive for COVID-19
<di