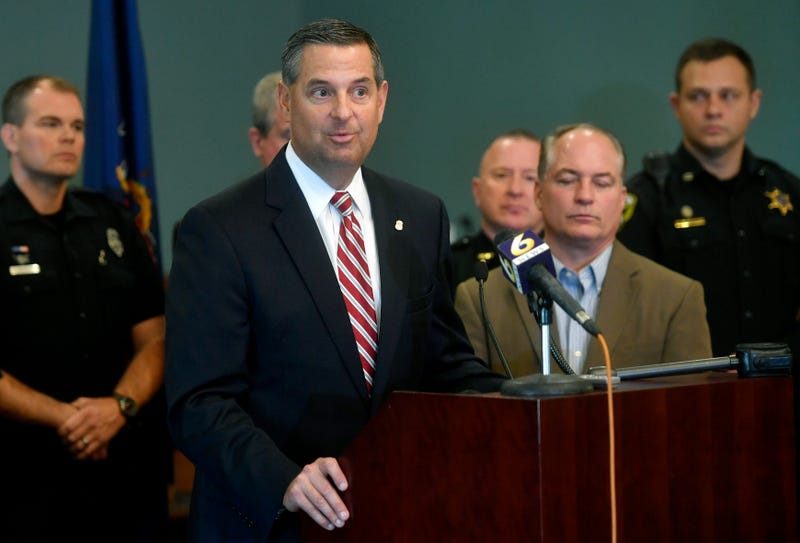 Photo credit FILE - In this Oct. 19, 2018 file photo, U.S. Attorney David Freed speaks at a news conference at the Centre County Courthouse Annex in Bellefonte, Pa. Freed's office issued a statement on Thursday, Sept. 24, 2020, that nine mailed-in military ballots had been "discarded" by the local election office. The announcement was seized on by President Donald Trump and his supporters. The U.S. attorney's announcement of the investigation Thursday provided few details, but did mention the votes were for Trump. (Abby Drey/Centre Daily Times via AP, File)
By The Associated Press

HARRISBURG, Pa. (AP) — The news release from a U.S. attorney in Pennsylvania was provocative: Nine mailed-in military ballots had been “discarded” by the local election office in a swing county of one of the most important presidential battleground states.

All of them were marked for President Donald Trump, it said. Then came another news release with key details changed — the presidential choice was unknown on two of the ballots because they had been resealed — but still little explanation of what had happened and whether investigators believed a criminal act had occurred.

Despite the information vacuum, the White House press secretary told reporters “ballots for the president” had been “cast aside.” The Trump campaign’s rapid response arm pushed out the release from Trump’s own Justice Department under the headline “Democrats are trying to steal the election” — ignoring the fact that the local government, Luzerne County, is controlled by Republicans. Conservative voices used the news release as rocket fuel to amplify the investigation on social media.

Thursday’s kerfuffle and accompanying internet outrage over a handful of ballots is likely a taste of what’s to come in the month left before the presidential election, which is being held amid a global pandemic that has triggered a wave of absentee ballot requests as Trump continues to launch unsubstantiated attacks on mail voting.

It was Trump, after being briefed on the case by Attorney General William Barr, who first revealed publicly that the discarded ballots had been cast for him. He did so in an interview earlier Thursday with Fox News Radio in which he used the investigation to further sow doubt about mail-in voting. The radio interview was hours before the U.S. attorney's office in Pennsylvania issued its news release about the probe to reporters.

“If past is prologue, we will see more,” said Wendy Weiser, an elections expert and director of the democracy program at the Brennan Center for Justice. “We are in an unprecedented situation where a sitting president of the United States and a candidate for reelection is and has long been actively seeking to undermine the election and discredit it.”

Weiser said it was important that officials provide detailed information about any voting issues that arise, which happen every election cycle. For instance, officials with the U.S. Postal Service said this week they are investigating a report that an unknown number of ballots were among other mail found in a ditch near a highway intersection in Wisconsin, another presidential battleground state.

Officials have so far released little information in that case, including whether the ballots were blank and on their way to voters or if they had been completed and were being returned to the local election office.

Experts say the lack of information in these cases opens the door to speculation and conspiracy theories.

By Friday, more details had emerged in the Pennsylvania case. Federal officials were considering whether a recently hired, temporary election worker may have mishandled the ballots. Aside from the unknowns about the investigation itself, questions persist over how the Justice Department handled the matter.

The first word of a federal investigation into unspecified “issues with a small number of mail-in ballots” came in a statement Tuesday by the local district attorney in Luzerne County. There was no mention of Trump, and there was little attention to the case beyond local news reports.

That all changed when the office of U.S. Attorney Dave Freed issued Thursday’s statement, an unusual step given U.S. Department of Justice guidance to refrain generally from commenting on any investigation — especially one involving an election in which voters already are casting ballots. In addition, the mention of which presidential candidate the ballots favored raised concerns among election law experts and voter advocacy groups (ballots include races for all kinds of offices and issues, not just the race for president).

The U.S. attorney’s office in Pennsylvania notified senior officials at Justice Department headquarters earlier this week about a small number of ballots that were found to be discarded, a person familiar with the matter told The Associated Press. Barr told Trump that the Justice Department was going to look into the matter before the department publicly confirmed the investigation, the person said.

The U.S. attorney’s office had received inquiries from loca