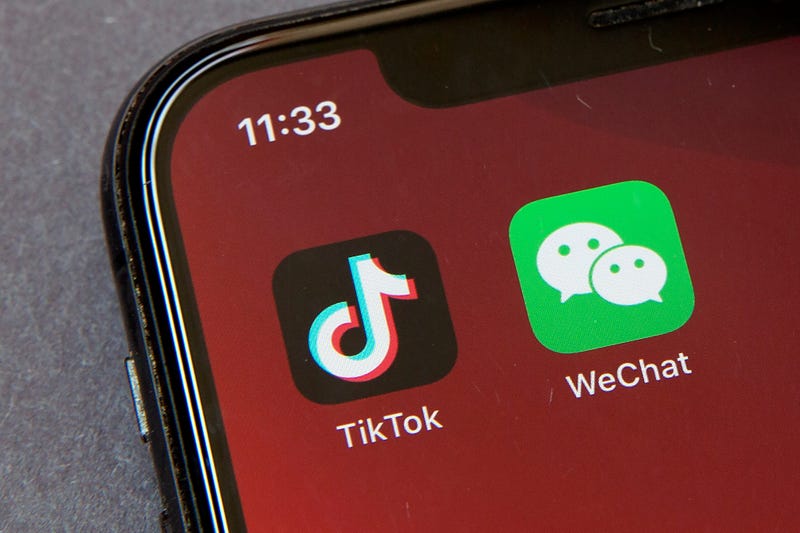 The U.S. government is cracking down on the Chinese apps TikTok and WeChat, starting by barring them from app stores on Sunday.

President Donald Trump has cited concerns about Chinese government snooping as his administration prepares to follow through on executive orders that could make it increasingly difficult, if not impossible, for Americans to use the apps.

Trump has also floated a potential way out, at least for TikTok, which on Friday he called an “amazing company” that is “very, very popular.”

WHEN DO THE BANS TAKE EFFECT?

The order disallowing TikTok and WeChat from smartphone app stores takes effect Sunday, as do additional restrictions on the use of WeChat.

A broader ban on the use of TikTok will follow on Nov. 12 unless its Chinese parent company ByteDance is able to persuade U.S. officials that it can resolve national security concerns. On Saturday, Trump said he has approved “in concept” a deal that would see the popular video-sharing app partner with Oracle and Walmart to become a U.S. company. Trump said the new company “will have nothing to do with China.” But the deal still needs to be finalized.

WHAT ARE TIKTOK AND WECHAT?

TikTok is a smartphone app for making and watching short videos that's popular with teens and young adults, with typical posts centered around lip syncing, dancing or making people laugh. TikTok says it has 100 million U.S. users and hundreds of millions globally. It has its own influencer culture, enabling people to make a living by posting videos on the service, and hosts ads from major U.S. companies.

WeChat is a messaging-focused app that in the U.S. serves as a lifeline to friends, family, customers and business contacts in China. Its owner, Chinese tech giant Tencent, says it has more than a billion users, mostly in China, where it's an all-purpose app used for everything from texting to social media, cab-hailing and payments.

WHAT DOES THE BAN MEAN FOR USERS?

For WeChat users, the order won't prohibit individual users from sending texts or making payments. But it could throw a wrench into WeChat's operations and make it hard for the app to keeping running in the U.S. by blocking critical technical services provided by other companies.

For TikTok users who've already downloaded the app, it should still work normally for now. Users, however, might be blocked from getting important app software updates that fix bugs and security vulnerabilities. Further restrictions echoing those targeting WeChat are set for Nov. 12.

Maybe, though none are very good. It's possible to bypass the TikTok app to view the service on a web home screen, but users wouldn't be able to make videos — which could eventually mean fewer new American-made videos to watch.

App users can try to use virtual private networks, or VPNs, to disguise their location and pretend they're in another country. But that raises additional security concerns, especially for users who go with a free or cheap VPN provider they haven't carefully vetted.

Users can also use tricks to sidestep the Apple and Android app store process, but these also pose security risks.

“If there's a software update, well, WeChat might stop working,” said Nicholas Weaver, a computer science lecturer at UC Berkeley. “If you don’t update your phone, it's a security risk. It puts users in an impossible position.”

HAS THE U.S. BANNED PHONE APPS BEFORE?

Not in this way, though such censorship is common in China, said Paul Bischoff, a consumer privacy expert.

Bischoff said it's especially troubling because he has found no evidence that the Chinese government is actually using TikTok as a spying tool, though the advertising-fueled app sucks up personal data much like other social media platforms.

“This is the first time we’ve ever banned an app through an executive order,” he said. “I wonder what sort of precedent that sets for other apps that the current administration sees as a threat or just doesn’t like."

WHAT DO TIKTOK USERS THINK ABOUT IT?

The way that TikTok personalizes what videos it shows to each user makes it hard to gauge what the userbase as a whole thinks of the U.S. government actions.

But those who spoke with The Associated Press about the actions shared a mix of skepticism and annoyance.

Carrie Berk, a 17-year-old college freshman in New York, said she’s not sure it will really happen.

“I feel like I’ve done this a few times now," she said. "There’s been so many fake-outs where you see in the news it’s getting banned tomorrow” – though the official deadline has always been Sunday. She posted a video in early July about changing a phone’s settings to Canada so that TikTok could still work, and it’s gotten over 5 million views.

WHY THE DELAYED TIKTOK BAN?

Scheduling a total TikTok ban for Nov. 12 delays its effects on millions of American users until after the Nov. 3 presidential election, but it also leaves more time for ByteDance to finalize an arrangement that satisfies government officials.

Trump said this summer he wants the app sold to a U.S. company that can protect U.S. users from Chinese government spying and censorship. ByteDance proposed an arrangement that lets the California database-software company Oracle manage the data of U.S. users and oversee the app's technology. But Saturday Trump said he has given his “blessing” to a proposed deal between TikTok, Oracle and WalMart that would leave TikTok under the control of the U.S. companies. But the deal still needs to be finalized.

Elsa Kania, a fellow at the Center for a New American Security who focuses on technology and U.S.-