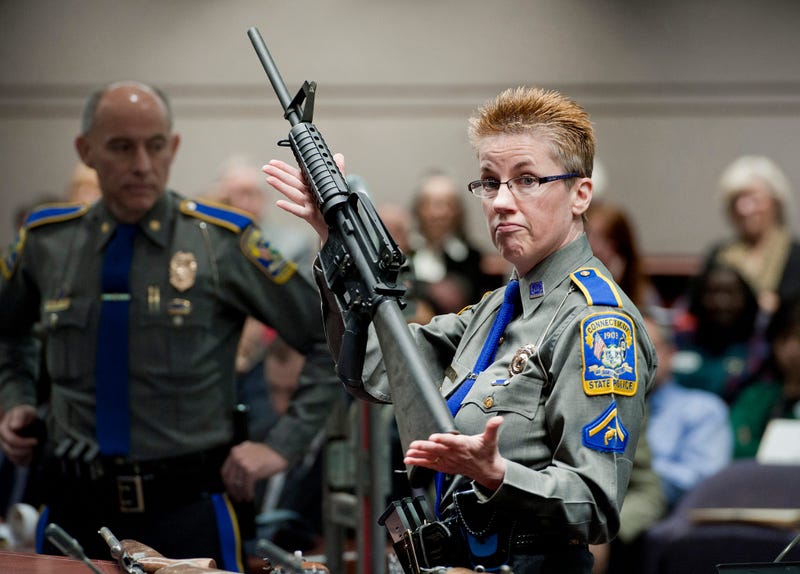 Photo credit FILE - In this Jan. 28, 2013, file photo, firearms training unit Detective Barbara J. Mattson, of the Connecticut State Police, holds up a Bushmaster AR-15 rifle made by Remington Arms, the same make and model of the gun used by Adam Lanza in the December 2012 Sandy Hook School shooting, during a hearing of a legislative subcommittee in Hartford, Conn. On Tuesday, Aug. 18, 2020, a lawyer for some of the Sandy Hook school shooting victims accused Remington Arms of using its new bankruptcy case to try to wipe out the families' lawsuit against the company over how it marketed the rifle used in the massacre. (AP Photo/Jessica Hill, File)
By The Associated Press

HARTFORD, Conn. (AP) — A lawyer for some of the Sandy Hook school shooting victims' families accused Remington Arms on Tuesday of using its new bankruptcy case to try to wipe out their lawsuit over how the company marketed the rifle used in the massacre.

An attorney for Remington denied the allegation during a phone conference call presided over by a federal bankruptcy court judge in Decatur, Alabama.

Also Tuesday, the judge, Clifton Jessup Jr., denied the families' request to create a committee — comprised of people who are suing Remington over the use of its products — that would have a say in the bankruptcy proceedings. The judge, however, allowed one lawsuit plaintiff — not the Sandy Hook families — to sit on the main committee of unsecured creditors.

David Elsberg, a lawyer for the families, said Remington is trying to rush an auction of its holdings, leave the families out of the process and has not included their lawsuit or other lawsuits over its products in the new bankruptcy case it filed late last month. He said the bankruptcy case is so new that many people who may have claims against the company may not even know about the case.

“The families have grave concerns about the speed, the breakneck speed, that the debtors (Remington) are setting up for the sale,” Elsberg said. “There won’t be, there simply can’t be, a full and fair process unless this high-speed train that we’re on slows down.”

Despite the bankruptcy case being filed only last month, Remington — the nation's oldest gun maker, based in Madison, North Carolina — already is planning to sell off its holdings in a Sept. 17 auction. The company has a plant in Huntsville, Alabama.

It's the company's second bankruptcy filing in two years. Remington, weighed down by lawsuits and retail sales restrictions following the Sandy Hook school shooting in 2012, listed assets and liabilities of between $100 million and $500 million, and between 1,000 and 5,000 creditors, in its new case.

A gunman using a Bushmaster AR-15-style rifle made by Remington killed 20 children and six educators at Sandy Hook Elementary School in Newtown, Connecticut, on Dec. 14, 2012.

A survivor and relatives of nine victims of the shooting are suing Remington in Connecticut Superior Court, saying the company should have never sold such a dangerous weapon to the public and alleging it targeted younger, at-risk males in marketing and product placement in violent video games. The lawsuit has been put on hold because of the bankruptcy case. Remington denies the lawsuit's allegations and says it is immune from being sued under federal law.

Jessup on Tuesday approved a schedule for the Sept. 17 auction that allows the Sandy Hook families and others to object to the sale by Sept. 1. He dismissed the families' objection to the schedule.

Nancy Mitchell, a lawyer for Remington, told the judge that Elsberg's comments about the company trying to rush the process and exclude the families were not true.

A lawyer for the United Mine Workers of America union also expressed concerns Tuesday about retired Remington workers losing their benefits because of the bankruptcy. Jessup allowed a union representative to sit on the unsecured creditors committee, but as an ex-officio member with a voice but no vote.

The judge also gave a spot on the committee to the parents of a Montana teenager who died in 2015 from a gunshot wound from a Remington rifle — giving lawsuit plaintiffs a voice and vote. Sharon and Randall Teague are suing the company, saying their son was carrying the hunting rifle at their Seeley Lake home when it fired accidentally because of a defective design and killed him.

Remington, in court papers, has denied the Teagues' allegations and questioned whether their son's death was a suicide.