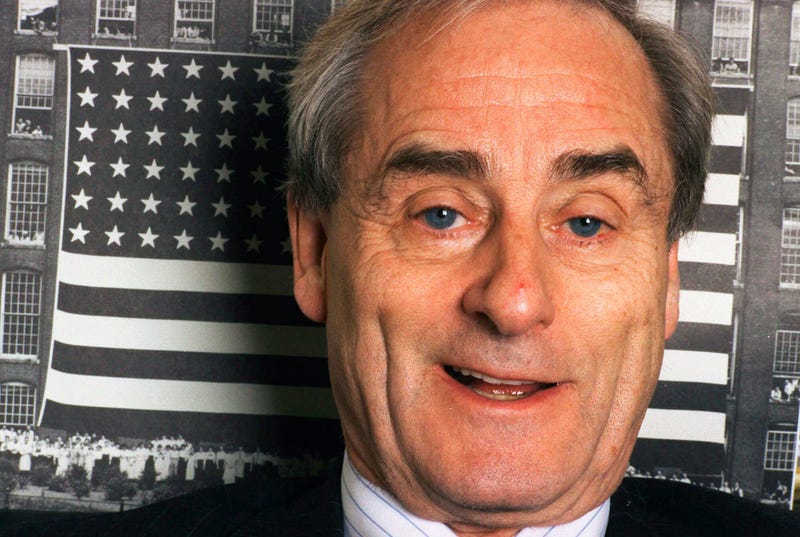 Photo credit FILE - In this Nov. 18, 1998 file photo, journalist Harold Evans talks about his new book, "The American Century," at his office in New York. Evans, the charismatic publisher, author and muckraker, has died at 92. His wife, fellow author-publisher Tina Brown, said he died of congestive heart failure, it was reported on Thursday, Sept. 24, 2020. He was a bold-faced name for decades, from exposing wrongdoing in 1960s London, to publishing such 1990s best-sellers as Joe Klein’s “Primary Colors.” (AP Photo/Jim Cooper, File)
By The Associated Press

NEW YORK (AP) — Sir Harold Evans, the charismatic publisher, author and muckraker who brought investigative moxie to the British press, newsmaking dash to the American book business through best-sellers like “Primary Colors” and synergetic buzz to all as author-publisher Tina Brown’s husband, has died. He was 92.

Brown said he died Wednesday in New York of congestive heart failure. She added that there would be a “very small" family funeral, and, depending on the status of the coronavirus pandemic, a celebration next June in London.

“He was the love of my life," Brown wrote Thursday in an email to The Associated Press. “His magical optimism lifted up our family every day he was alive and I could have achieved nothing without him by my side.”

A vision of British erudition and sass, Evans was a high-profile go-getter, starting in the 1960s as an editor of the Northern Echo and the Sunday Times of London and continuing into the 1990s as president of Random House. His marriage to Brown was a paradigm of media clout and A-list access that helped shape the book and magazine markets for years and helped embody the term “synergy” for businesses reinforcing each other.

A defender of literature and print journalism well into the digital age, Evans was one of the all-time newspaper editors, startling British society with revelations of espionage, corporate wrongdoing and government scandal. In the U.S., he published such attention-getters as the mysterious political novel “Primary Colors” and memoirs by such unlikely authors as Manuel Noriega and Marlon Brando.

He was knighted by his native Britain in 2004 for his contributions to journalism.

“Harold Evans was a true genius. I know of no one else who had the range he had with words — as crusading editor, thoughtful writer, book publisher, book author and most importantly in energetic conversation," Bob Woodward wrote in an email Thursday to the AP.

He held his own, and more, with the world’s elite, but was mindful of his working class background: a locomotive driver’s son, born in Lancashire, English, in 1928, and evacuated to Wales during World War II. After serving in the Royal Air Force, he studied politics and economics at Durham University and received a master’s in foreign policy. The drive to report, to expose, dated back to his teens, when he discovered that newspapers had wildly romanticized the Battle of Dunkirk between German and British soldiers.

“A newspaper is an argument on the way to a deadline,” he once wrote. He was just 16 when he got his first journalism job, at a local newspaper in Lancashire, and after graduating from college he became an assistant editor at the Manchester Evening News. In his early 30s, he was hired to edit the Daily Echo and began attracting national attention with crusades such as government funding for cancer smear tests for women.

He had yet to turn 40 when he became editor of the Sunday Times, where he reigned and rebelled for 14 years until he was pushed out by a new boss, Rupert Murdoch. Notable stories included publishing the diaries of former Labour Minister Richard Crossman; taking on the manufacturers of the drug Thalidomide, which caused birth defects in children; and revealing that Britain's Kim Philby was a Soviet spy.

“There have been many times when I have found that what was presented as truth did not square with what I discovered as a reporter, or later as an editor, learned from good shoe-leather reporters,” he observed in “My Paper Chase,” published in 2009. “We all understand in an age of terrorism that refraining from exposing a lie may be necessary for the protection of innocents. But ‘national interest’ is an elastic concept that if stretched can snap with a sting.”

Meanwhile, Evans became infatuated with an irreverent blonde just out of Oxford, Tina Brown. Their initial communication was comedy worthy of Brown’s society reportage. Evans came upon some writings by a Tina Brown that so impressed him he contacted the author, only to learn that “Tina Brown” was short for Bettina Brown, his future wife’s mother.

The then-married Evans would soon meet the proper “Tina,” and began a long-distance correspondence (He in London, she in New York), that grew intimate enough for Evans to “fall in love by post.” They were married, in East Hampton, New York, in 1981. The Washington Post’s Ben Bradlee was best man, Nora Ephron among the guests.

With Brown, Evans had two children, adding to the three children he had with his first wife, Enid Parker.

Their garden apartment on Manhattan’s exclusive Sutton Place became a mini-media dynasty: He the champion of justice, rogues and belles lettres, she the award-winning provocateur and chronicler of the famous — as head of Tatler in England, then Vanity Fair and The New Yorker, and as author of a best-selling book about Princess Diana.