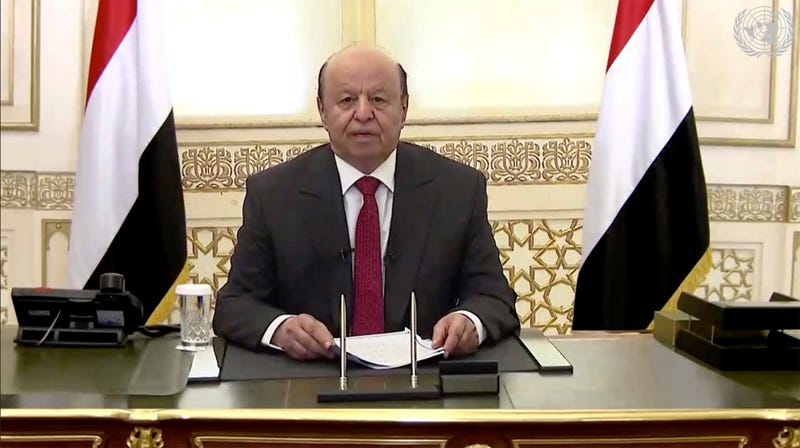 Photo credit In this image made from UNTV video, Abdrabuh Mansour Hadi Mansour, President, of Yemen, speaks in a pre-recorded message which was played during the 75th session of the United Nations General Assembly, Thursday Sept. 24, 2020, at U.N. headquarters in New York. (UNTV via AP)
By The Associated Press

UNITED NATIONS (AP) — The Latest from the U.N. General Assembly (all times EDT):

Yemen’s embattled and exiled president is urging his government’s rival, the Iran-backed Houthi rebels, to stop impeding the flow of urgently needed humanitarian aid. He also is asking that they allow a U.N. team immediate access to an abandoned oil tanker that risks causing massive environmental damage to the Red Sea.

President Abed Rabbo Mansour Hadi made the plea in a prerecorded speech to the U.N. General Assembly’s virtual summit. He spoke from Saudi Arabia, where he has been living during the more than five-year-long war that has ravaged the Arab world’s poorest nation on the western tip of the Arabian Peninsula.

Hadi represents the internationally-recognized government of Yemen that was pushed out of the capital, Sanaa, in late 2014 by the Houthis. A Saudi-led coalition backing Hadi has been at war in Yemen ever since, sparking the world’s worst humanitarian disaster. Millions have been displaced, pushed into poverty and live on the brink of famine.

“We are trying to save our country and establish a just and lasting peace,” Hadi said, blaming Iran directly for meddling in his nation. “The objective is to stop the blood-letting in Yemen.”

More than 17,500 civilians have been killed and injured since 2015, and a quarter of all civilians killed in air raids are women and children, according to the Yemen Data Project. Thousands of the country’s civilian deaths are blamed on Saudi coalition airstrikes, which are backed by the U.nited States. Last year, President Donald Trump vetoed a resolution passed by Congress to end U.S. military assistance in Saudi Arabia’s war in Yemen.

Multiple attempts by the U.N. to broker a peace deal have failed to end the conflict.

In addition to the humanitarian toll, the Yemeni government in exile, the U.N., and western diplomats have been sounding the alarm and putting pressure on Houthis to secure the decaying oil tanker near the port of Hodeida, which the group controls.

African nations have come out swinging on the third day of the United Nations annual gathering of world leaders, calling for dramatic fiscal measures to help the continent’s economies survive the coronavirus pandemic.

They seek debt cancellation to free up more resources to tackle the virus and its effects, including the fight against other deadly diseases.

The president of Ivory Coast, one of the world’s fastest-growing economies before the pandemic, called for the extension of a debt moratorium and the issue of special drawing rights at the International Monetary Fund.

“I call on all Africa’s partners to take bolder measures,” Alassane Ouattara said, noting that the fight against COVID-19 and its economic effects has represented 5% of the country’s GDP.

African nations estimate they need $100 billion in support annually for the next three years, pointing out it’s a fraction of the trillions of dollars some richer countries are using to revive their economies.

The United Nations chief says the world failed to cooperate in tackling the COVID-19 pandemic, and if its response to the climate crisis is equally poor “I fear the worst.”

Secretary-General Antonio Guterres told the U.N. Security Council that the “”tiny microscopic virus is now the number one threat in our world.” He blamed a lack of global preparedness, cooperation, unity and solidarity for the international community's failure.

The council met Thursday on the sidelines of the General Assembly’s annual gathering of world leaders — both held virtually because of the COVID-19 pandemic.

Guterres pointed to the nearly one million deaths and 30 million infections around the world and warned that the coronavirus remains out of control.

“As countries go in different directions, the virus goes in every direction,” he said.

Guterres called for global cooperation among nations, global and regional organizations, international financial institutions, trade alliances and others. He said the idea of global governance must be broadened “to take in businesses, civil society, cities and regions, academia and young people.”

Guterres said COVID-19 is a warning “that must spur us to action.”

“We have no choice,” he said. “Either we come together in global institutions that are fit for purpose, or we will be crushed by divisiveness and chaos.”