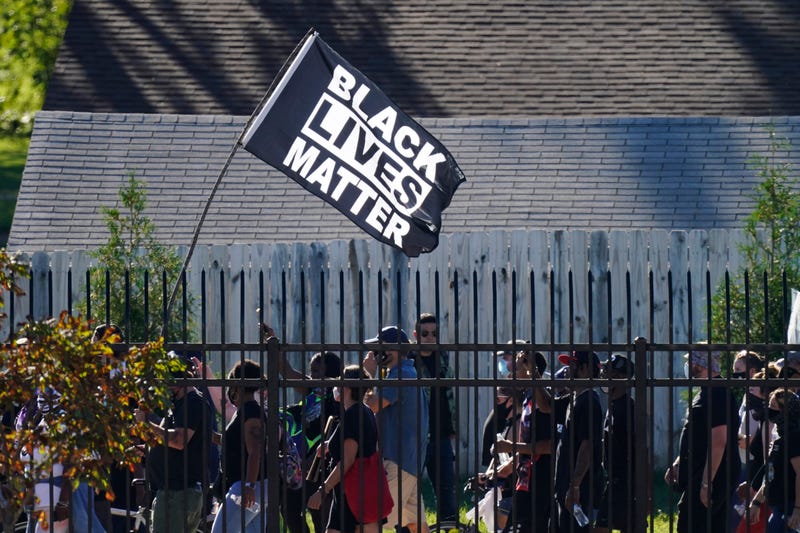 LOUISVILLE, Ky. (AP) — The Latest on the 146th Kentucky Derby at Churchill Downs (all times EDT):

Thousands of protesters are marching around the gates surrounding Churchill Downs, chanting Breonna Taylor’s name less than an hour before the 146th Kentucky Derby.

Protests have occurred for 101 days in Louisville, with calls for police to be charged in Taylor's shooting death during a narcotics raid on March 13. No drugs were found. A recent demonstration near the historic track resulted in 64 arrests, and more protests were expected around the venue.

The protesters marched 2 miles from a city park and circled the track on the front and back sides. They chanted “No Justice, No Derby!” and carried signs imploring people to say Taylor’s name.

“What are we celebrating?” one of the organizers, Brittany Wiley, told the crowd as it gathered. “We don’t want mint juleps. We want justice. We’re not partying. We’re protesting. No justice? No Derby.”

Inside the gate, police in riot gear with clubs — some on horses and some with armored military vehicles — are following along with the protesters from the inside.

Tiz the Law remains the Kentucky Derby favorite at 4-5 odds with less than 90 minutes to go before the scheduled 7:01 p.m. post time. Honor A. P. is the second choice at 8-1, followed by Authentic at 9-1.

The other 13 horses are listed at double digits. With no spectators in attendance at Churchill Downs, wagering is being conducted online and at off-track betting locations.

A victory in the 146th Derby would put the colt bred in upstate New York in position to become racing’s 14th Triple Crown winner going into next month’s Preakness.

Wanda Martin lives across from the backside of Churchill Downs. Usually her lawn is a party, full of food, music and dancing. Friends come from all over the county to visit. Martin grew up in the horse racing business. She worked for trainers, feeding and caring for the racehorses.

It is usually her favorite week of the year. She sells T-shirts with sayings like, “Talk Derby to me” and “go baby go.”

The only thing Martin could come up with to put on her shirts this year was “2020 Worst Derby Ever.” She hung them from a clothes line across the front of her lawn.

A few hours before the race, the street was filled with only police officers.

“We’ve had some good times,” she said. “This is just not Derby. I know it’s for our protection, but it’s not like Derby at all.”

Martin knows she’s not the only one who feels that way. She’s sold 15 of her shirts.

Early races have gone off at sunny Churchill Downs in the lead-up to the 146th Kentucky Derby, set to begin without spectators beneath the Twin Spires and with protests against social injustice expected to take place nearby.

Rescheduled from its traditional first Saturday in May by the coronavirus pandemic, this year's Run For The Roses is the second jewel in thoroughbred racing’s Triple Crown.

Tiz the Law enters the $3 million race as the 3-5 morning line favorite for the 16-horse field with odds likely to rise by the scheduled 7:02 p.m. post time. The colt won the Belmont Stakes and can become the first Derby winner from the No. 17 post.