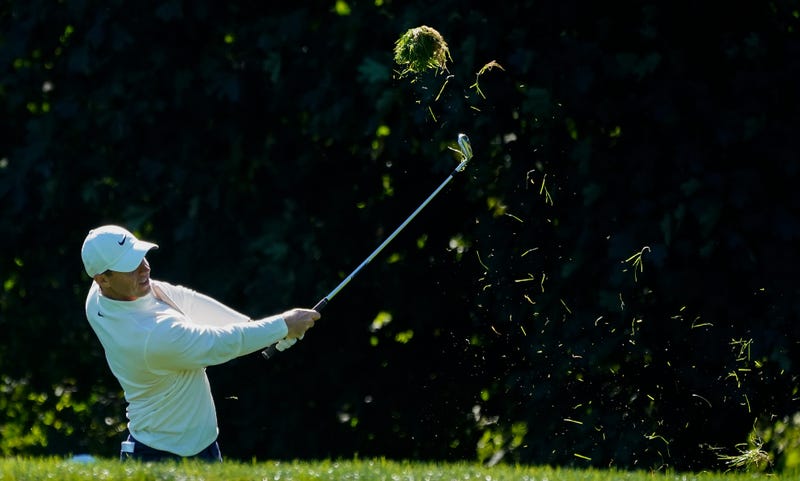 Photo credit Rory McIlroy, of Northern Ireland, hits out of the rough on the 14th hole during the third round of the US Open Golf Championship, Saturday, Sept. 19, 2020, in Mamaroneck, N.Y. (AP Photo/Charles Krupa)
By The Associated Press

MAMARONECK, N.Y. (AP) — The Latest from the final round of the U.S. Open, golf’s second major of the year (all times EDT):

It was an ugly start to the final round for Rory McIlroy and Harris English.

McIlroy needed four putts from just off the front of the first green en route to a double bogey.

English hit an errant tee shot and, even with the help of marshals surrounding the fairway, could not find his ball in the three-minute limit. He had to go back to the tee box and re-tee, and from there, he also made double.

McIlroy is now at 3 over and English is at 2 over. Leader Matthew Wolff is at 5 under and started his round with a drive that hit the fairway. He hit only two all day Saturday over a round of 65.

While the leaders are warming up at Winged Foot, the U.S. Open's lone remaining amateur is done with his round.

John Pak, a senior at Florida State who grew up not far from Winged Foot, shot 4-over 74 to finish the tournament at 18-over 298.

Matthew Wolff has an afternoon tee time and will start at 5-under par, with a two-shot lead over Bryson DeChambeau on a brisk, breezy day at Winged Foot.

The 21-year-old Wolff is trying to become the youngest U.S. Open winner since Bobby Jones in 1923. DeChambeau is hoping to add the U.S. Open title to his U.S. Amateur title in 2015. The only other player to begin the day under par was 2010 British Open champion Louis Oosthuizen. He's at 1 under.

Also in the mix are Xander Schauffele, Harris English and Hideki Matsuyama, who all begin the day at even par.

The lowest score of the early starters belongs to Shane Lowry, who shot 2 over.