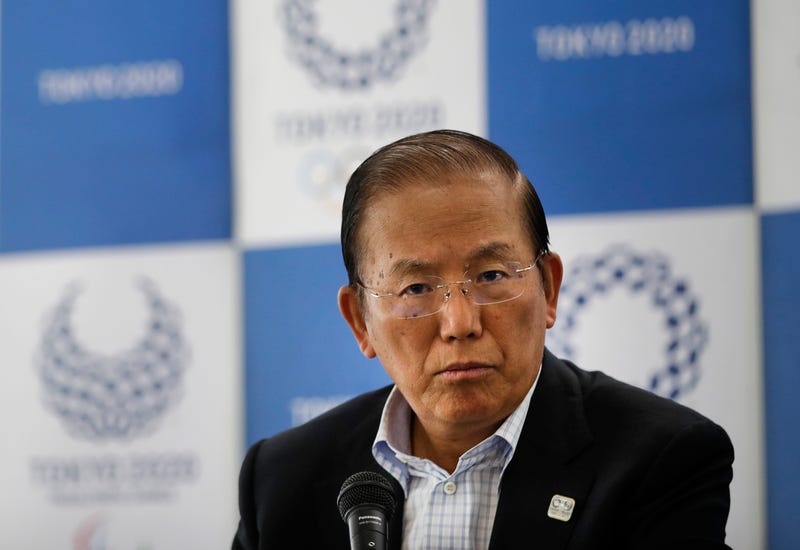 Photo credit In this June 11, 2019, file photo, Toshiro Muto, CEO of the 2020 Tokyo Olympics organizing committee, listens to questions from the media during a news conference in Tokyo. Tokyo CEO Muto and other Olympic officials are proposing that the government relax immigration regulations, allowing athletes to enter the country before next year’s postponed games and train during a 14-day quarantine period. (AP Photo/Jae C. Hong, File)
By The Associated Press

TOKYO (AP) — Tokyo Olympics officials are proposing that the government relax immigration regulations to allow athletes to enter the country before next year's postponed games and train during a 14-day quarantine period, Toshiro Muto, the CEO of the organizing committee said on Wednesday.

“We have to consider the uniqueness of the athletes and also their activities," Muto said, speaking in Japanese following a meeting of a task force considering countermeasures against the COVID-19 pandemic.

The International Olympic Committee, Tokyo city and national government officials, and members of the organizing committee are holding virtual meetings on Thursday and Friday focused on finding ways to hold the delayed Olympics during a pandemic.

The organizing committee and the IOC have said for months they are considering many scenarios for how the games can open on July 23, 2021, but have offered nothing specific.

IOC President Thomas Bach, who will address the online meetings on Thursday, has said a vaccine and rapid testing would help, but added there is no “silver bullet” that will allow the Olympics to automatically happen.

Bach and new Japanese Prime Minister Yoshihide Suga spoke for 15 minutes on Wednesday, the foreign ministry said. They talked about pulling off the games, and Bach said he hoped to soon visit Japan.

Muto summed up dealing with so many disparate and often competing interests representing 15,400 Olympic and Paralympic athletes, officials, coaches, sponsors — not to mention the question of Japanese and foreign fans.

Muto said a report would be forthcoming in December, after talks with the IOC, national Olympic committees, sports federations and myriad other parties including broadcasters, athletes, sponsors and medical officials.

He acknowledged that athletes might have to use public transportation in Japan, suggesting a complete “bubble” would be impossible.

And he raised the issue of how the pandemic is at very different stages in many countries — as is testing. Athletes would be expected to be tested before they leave home, and then be tested again in Japan.

“Depending on the country, the reliability of the testing is still an issue,” he said. “The accuracy of the tests may not be uniform."

Left unsaid so far is an official estimate of what the one-year delay will cost. Most estimates suggest several billion dollars, most of which falls to Japanese taxpayers.

The two-day meetings come the same week that the Japanese media reported again on the bribery scandal tied to the Tokyo Olympics. It forced the resignation last year of Japanese Olympic Committee President Tsunekazu Takeda.

The University of Oxford also released a study last week saying that Tokyo is the most expensive Summer Olympics on record.

Japan has recorded about 1,500 deaths from COVID-19, much lower per capita than the United States, Brazil, or India.