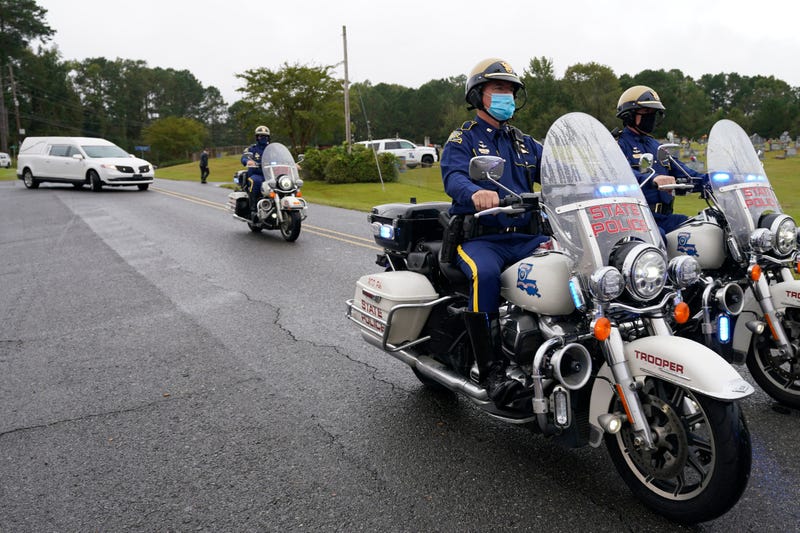 Photo credit A Louisiana State Police motorcycle honor guard precedes the hearse carrying the body of Master Trooper Chris Hollingsworth, Friday, Sept. 25, 2020, in West Monroe, La. Hollingsworth, killed in a car crash hours after he was told he would be fired for his role in the death of a Black man, was buried with honors Friday at a ceremony that authorities sought to keep secret out of concerns it would attract a mass protest. (AP Photo/Rogelio V. Solis)
By The Associated Press

WEST MONROE, La. (AP) — A Louisiana state trooper who died in a single-car crash just hours after he was told he would be fired for his role in the death of a Black man was buried with honors Friday at a ceremony that authorities sought to keep secret out of concerns it would attract a mass protest.

State Police officials and family members mourned Master Trooper Chris Hollingsworth under tight security at services that marked the latest turn in the long-simmering in-custody death case of Ronald Greene, which has prompted a federal civil-rights probe and increasing calls for authorities to release body-camera video.

Hollingsworth, who was white, was the only one of six troopers placed on leave earlier this month in the May 2019 death of Greene following a high-speed chase. Police initially told Greene’s family he died from injuries in a crash but later acknowledged troopers “struggled” with him during the arrest. Greene’s family has filed a federal wrongful-death suit alleging troopers “brutalized” him, shocked him three times with a stun gun and left him “beaten, bloodied and in cardiac arrest.”

Hollingsworth died Tuesday from injuries suffered in a single-car highway crash in Monroe that came just hours after he received a letter informing him that State Police intended to fire him over his role in Greene's death.

State Police have refused to release that letter or any details of how the highway crash occurred. And despite mounting pressure, the agency has repeatedly refused to release body-camera footage from Greene's arrest, citing the ongoing state and federal investigations.

On Friday, mourners, many in dress-blue trooper uniforms, packed the New Chapel Hill Baptist Church where Hollingsworth had been a member, filling its parking lots to capacity on a misty and overcast day.

The services were closed to the public despite a major police presence that included contingency plans for snipers, drones and a SWAT team to respond to any large disturbance, according to a law enforcement official familiar with the plans who spoke to The Associated Press on the condition of anonymity.

The plans underscored the growing tension in communities around the country where demonstrators have taken to the streets to protest racial injustice and the killing of Black people by police.

While no protests materialized at the funeral, several dozen people gathered later in the day outside the Governor's Mansion in Baton Rouge to denounce "violence or death at the hands of law enforcement officers.”

“For too long, the State Police has tolerated behavior that is unacceptable,” said Jamal Taylor, an organizer of the event from Lafayette, La.

Gov. John Bel Edwards, a Democrat, was not in attendance at Friday’s funeral, which included a State Police honor guard and escort for Hollingsworth, who served nearly three decades in law enforcement.

Unlike other trooper deaths, Hollingsworth’s was not announced internally by the agency’s superintendent, Col. Kevin Reeves.

“The Hollingsworth family has elected to have a private ceremony for family and friends and asks for privacy at this time,” said Lt. Nick Manale, a State Police spokesman. “Retired departmental personnel and active duty troopers who pass away in a non-line-of-duty death are afforded Honor Guard representation based on the requests of the family.”

An online fundraiser for the trooper’s family said Hollingsworth would be remembered for his “quick, contagious smile and his dedication” to his schoolteacher wife of 21 years and their teenage son.

news
Will you still need to wear masks at chains like Walmart and Target? This is where 15 major retailers stand
music
Tracee Ellis Ross responds to ‘Black-ish’ coming to an end next season: ‘It’s gonna be a good one!’
sports
'Dark Side of Football' series to feature episodes on Bill Belichick, the Browns and more: report