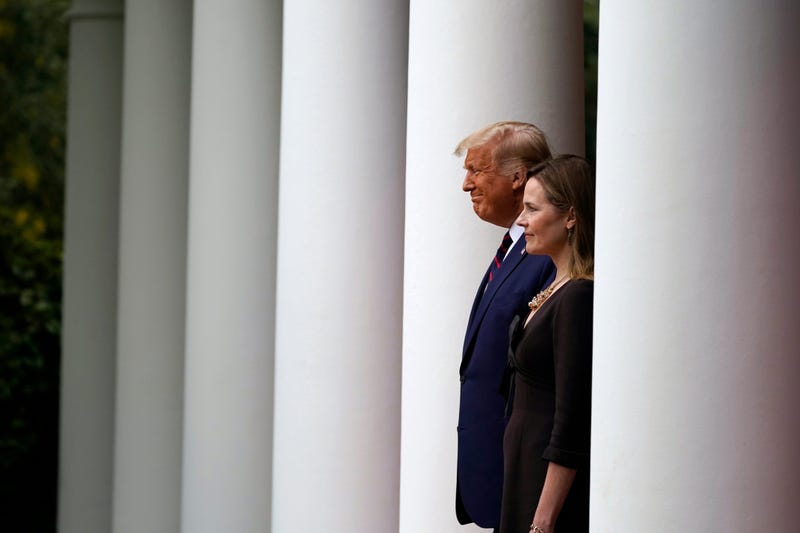 Photo credit President Donald Trump walks with Judge Amy Coney Barrett to a news conference to announce Barrett as his nominee to the Supreme Court, in the Rose Garden at the White House, Saturday, Sept. 26, 2020, in Washington. (AP Photo/Alex Brandon)
By The Associated Press

WASHINGTON (AP) — President Donald Trump said Sunday that confirmation of his Supreme Court nominee Amy Coney Barrett will go “quickly” but his Democratic rival, Joe Biden, implored the Republican-led Senate to hold off on voting on her nomination until after the Nov. 3 election to “let the people decide.”

Speaking at a press conference at the White House, the president spotlighted Barrett's Roman Catholic religion, portraying her as a victim of attacks on her faith. But it's her conservative approach to the law, particularly health care access that is drawing opposition from Democrats, not her private beliefs.

“It's a disgrace,” Trump said. He vowed she will be confirmed “very quickly.”

Trump's announcement of Barrett for the seat held by the late Justice Ruth Bader Ginsburg is launching a high-stakes, fast-track election season fight over confirmation of a conservative judge who is expected to shift the court rightward as it reviews health care, abortion access and other hot-button issues.

Biden on Sunday appealed directly to his former colleagues in the Senate to “take a step back from the brink."

Biden urged Senate Republicans not to fan a controversy during an already tumultuous election year for a country reeling from the coronavirus crisis, a struggling economy and protests over racial injustice. If Trump wins the election, his nominee should have a vote, Biden said, but if he wins the presidency, he should choose the next justice.