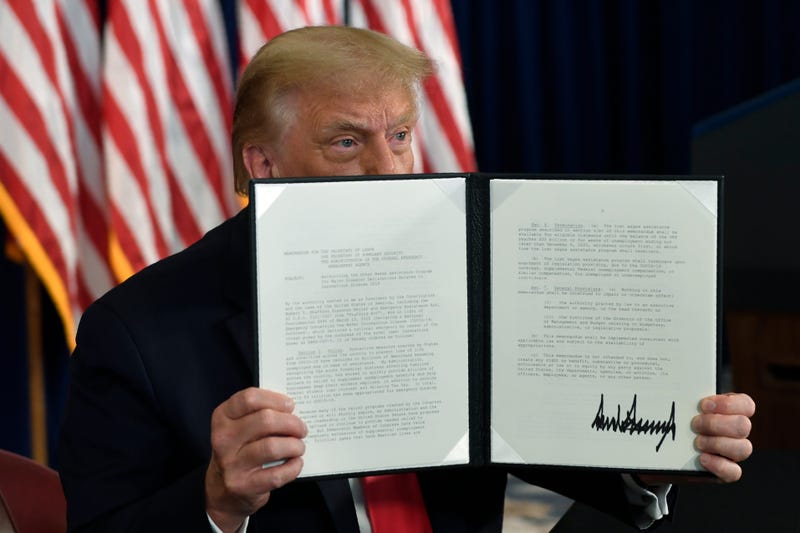 Trump acted Saturday after negotiations for a second pandemic relief bill reached an impasse. Democrats initially sought a $3.4 trillion package, but said they lowered their demand to $2 trillion. Republicans had proposed a $1 trillion plan.

The are questions about how effective Trump's measures will be. An order for supplemental unemployment insurance payments relies on state contributions that may not materialize. A payroll tax deferral may not translate into more spending money for workers depending on how employers implement it.

But the president is trying to stem a slide in the polls with a show of action three months before he faces Democratic challenger Joe Biden in the November election.

Here is a look at the four executive orders.

The president moved to keep paying a supplemental federal unemployment benefit for millions of Americans out of work during the outbreak. His order called for payments up to $400 each week, one-third less than the $600 people had been receiving under a benefit that expired last month.

How many people will receive the benefit and for how long is open to question. Trump said the payments would be funded 75% by the federal government and 25% by states. But it is unclear if states will pay that share, given acute budget shortfalls amid the economic recession. The federal government had been covering the full cost of the now-expired $600 supplement.

Ariel Zetlin-Jones, associate professor of economics at Carnegie Mellon University’s Tepper School of Business, said several states have already depleted their unemployment compensation trust funds and have requested federal loans to keep making payments. Trump's order, he said, is likely to exacerbate the debt burden for states and prove costlier in the long term because state governments borrow at higher costs than the federal government.

“This higher debt burden is one reason governors may resist enacting at least their share of $400 promised in the executive order,” Zetlin-Jones said.

The Trump administration is setting aside $44 billion from the Disaster Relief Fund to pay for the extra jobless benefits. Under the order, the payments will last through Dec. 6 — or until the disaster fund's balance falls to $25 billion. With hurricane season now u