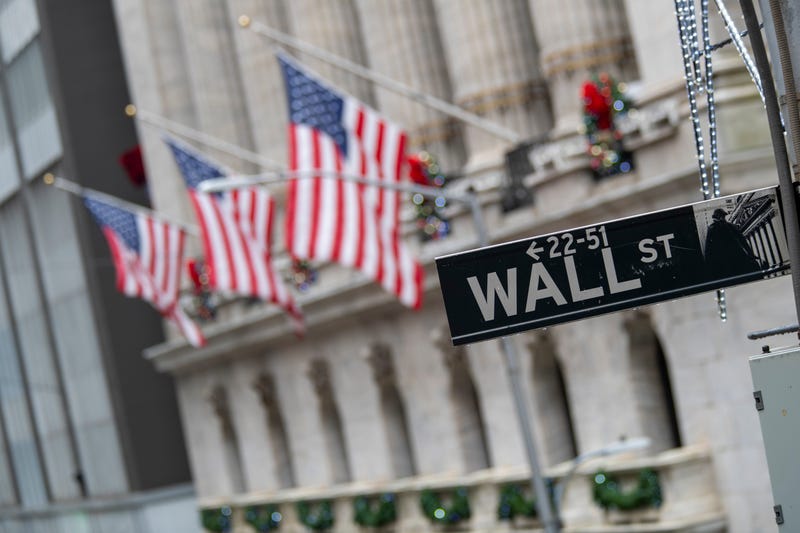 Photo credit FILE - In this Jan. 3, 2020 file photo, the Wall St. street sign is framed by American flags flying outside the New York Stock Exchange in New York. U.S. stocks are swinging between losses and gains in Thursday, Sept. 24, trading, as volatility continues to be the dominant force in Wall Street’s tumultuous September. (AP Photo/Mary Altaffer, File)
By The Associated Press

Stocks eked out modest gains Thursday even as volatility continued to be the dominant force in Wall Street's tumultuous September.

The S&P 500 rose 0.3% after earlier swinging between a loss of 0.9% and a gain of 1.3%. The market notched widespread gains, though technology stocks powered much of the turnaround. Out of the S&P 500′s 11 sectors, only health care ended the day lower.

The market’s momentum has shifted with lightning speed recently, often changing direction by the hour. On Wednesday, the S&P 500 rose to a modest gain when trading began, only to end the day with a 2.4% slump. The benchmark index is now down 9.3% from its record set on Sept. 2 and on pace for its first monthly decline after a five-month rally.

The market’s turbulent run this month comes as investors worry about the upcoming election, the sustainability of the economic recovery and the prospects for Congress to deliver more economic aid for struggling Americans. Uncertainty over how soon drugmakers will be able to develop a coronavirus vaccine is also weighing on investors' mood.

“We’re focused on the strategic and the long-term, rather than the day-to-day, because it’s going to be volatile between now and the election,” said George Rusnak, head of investment strategy at Wells Fargo Private Wealth Management.

Thursday's headline report showed that 870,000 workers filed for unemployment claims last week, a worse number than economists expected. The numbers come as investors are increasingly resigned to Congress not delivering more support for the economy, as many had been expecting, after extra unemployment benefits and other stimulus expired recently.

“Inaction speaks louder than words,” Morgan Stanley strategists wrote in a report. They no longer expect Congress to approve a meaningful stimulus package before the end of the year as part of its base case.

Stocks got a boost from a report showing that sales of new homes accelerated last month, contrary to economists' expectations for a slight slowdown. Homebuilders closed higher, led by a 7.2% gain for Beazer Homes USA.

Trading has been erratic on Wall Street this month, resulting in a sharp pullback for stocks. Several reasons are behind the abrupt tumble, highlighted by worries that stocks simply grew too expensive following their record-setting run through the spring and summer.

Among other concerns weighing on markets are the upcoming U.S. elections, particularly after President Donald Trump's refusal Wednesday to commit to a peaceful transition of power if he lost, and rising tensions between the United States and China.

Layered on top of it all is the still-raging coronavirus pandemic and the threat that worsening counts around the world could lead to more business restrictions.

It’s a stark shift from late March into early this month, when the S&P 500 soared 60% and more than recovered all its earlier losses on worries about the pandemic-caused recession. Still in investors’ favor is unprecedented support from the Federal Reserve, which is holding short-term interest rates at nearly zero and buying all kinds of bonds to support markets.

But Fed Chair Jerome Powell has said several times in testimony on Capitol Hill this week that the central bank can’t prop up the economy by itself and that the recovery likely needs more help from Congress.

Paralyzing partisanship has prevented a Congressional renewal of aid, and the recent vacancy on the Supreme Court caused by the death of Justice Ruth Bader Ginsburg has deepened the divide.

“The market was hoping for and anticipating some form of fiscal stimulus,” said Megan Horneman, director of portfolio strategy at Verdence Capital Advisors. “But that’s taking a backseat.”

Much of the market’s weakness this month has centered on Big Tech, where critics said prices exploded too high even after accounting for the companies' strong growth.

Amazon, Apple and others have seen their revenue continue to rise through the pandemic, as work-from-home and other trends that benefit them take deeper hold. But Amazon shares were up more than 90% for the year just a few weeks ago, for example, and they tumbled in recent weeks.

“It’s a healthy correction after a record run out of bear market territory,” Horneman said.

Moves for such stocks have an outsized effect on broad indexes like the S&P 500 because they're the largest companies in the market by value.