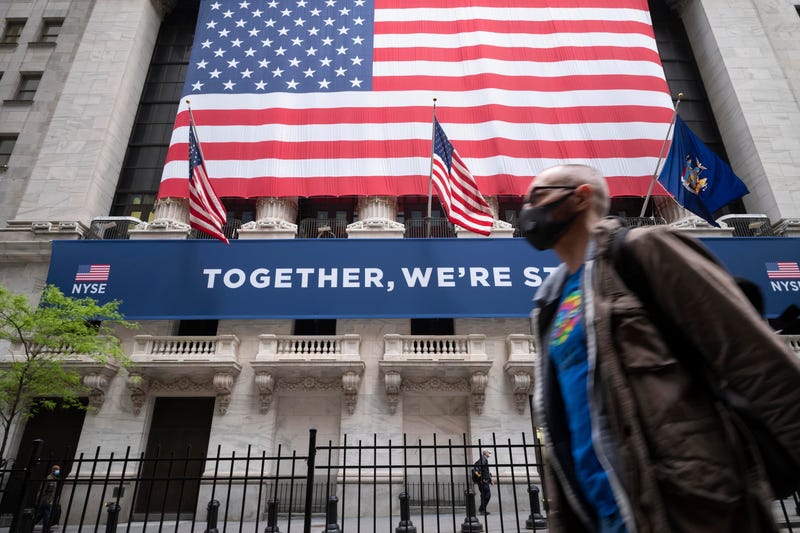 Photo credit FILE - In this May 26, 2020, file photo, a man wearing a protective face mask passes the New York Stock Exchange, as employees arrive for the partial reopening of the trading floor. Stocks are climbing in early trading on Monday, Aug. 24 on Wall Street, adding to their record-breaking run from last week. The S&P 500 was up 0.7% after the first 25 minutes of trading, following up on solid gains for stock markets across much of Europe and Asia. (AP Photo/Mark Lennihan, File)
By The Associated Press

NEW YORK (AP) — Stocks plowed higher on Wall Street Monday, as hopes for a COVID-19 treatment and vaccine had investors looking ahead to the possibility of a healthier economy that has shed the virus.

The S&P 500 rallied 34.12, or 1%, to 3,431.28 and added to the all-time high it set last week, when it erased the last of its losses from the coronavirus pandemic. It followed up on solid gains for stock markets across much of Europe and Asia.

Hope was rising as pharmaceutical companies continue to work toward a possible vaccine for COVID-19 and after the U.S. government on Sunday approved an emergency authorization to allow the use of convalescent plasma to treat patients. The plasma comes from patients who have recovered from the coronavirus, and it may help people battling the disease, though global health officials say the therapy is still experimental.

Such hopes helped invigorate shares of industries that have been badly beaten down by what's become the new normal of pandemic life. Airlines climbed, for example, amid the possibility that people may feel safe enough to travel again in the future. Delta Air Lines rose 9.3%, and American Airlines Group added 10.5%.

One winner of the new normal, Zoom Video Communications, stumbled. Its shares fell 2.6% after it reported partial outages in its Zoom Meetings service, which has become the default way for classrooms and businesses around the world to communicate. By midday on the East Coast, it said it had resolved the issue.

The market’s gains were relatively broad, and more than 80% of the stocks in the S&P 500 were higher. Financial companies, energy producers and other areas of the market closely tied to the economy's strength helped lead the way.

The moves come as investors hope the virus' spread continues to slow and the economy continues to improve, said Keith Buchanan, portfolio manager at Globalt Investments.

“We’re just making sure that the trends we’ve seen as of late from the virus continue to materialize,” he said. “We want to start to see marginal, steady improvement.”

Whether the stock market's gains continue to broaden out is an important marker for analysts, because much of its gains in its return to a record have come from only a handful of Big Tech companies. Apple, Amazon and other tech giants have benefited from the pandemic because it’s accelerated work-from-home, shop-from-home and other trends that are very profitable for them. But all that concentration of gains in a small cadre of companies can increase risk for the market.

Last week, the S&P 500 would have been down if not for the performance of a single stock: Apple, whose 8.2% spurt also made it the first U.S. stock to be worth a total of $2 trillion. And the dominance for Big Tech in the stock market has been stretching back for years.

“This is not new news nor is it likely, in our view, to derail the new bull market,” Morgan Stanley equity strategist Michael Wilson wrote in a report. “However, we do think it’s a precursor to the first tradable correction, which could begin imminently.”

Several other risks also continue to hang over the market.

Congress is continuing to argue about whether and how to deliver another round of aid to the economy. Investors say the assistance is crucial following the expiration of weekly unemployment benefits and other stimulus from Washington’s last round of aid.

Critics also say the market may have run too high, too quickly, even after acknowledging that investors are setting prices for stocks now based on where they see earnings trending in the future. The S&P 500 is trading close to levels last seen when the dot-com bubble was deflating in the early 2000s, based on stock prices relative to expected earnings in the next 12 months.

Of course, underlying all that remains the Federal Reserve. It has slashed short-term interest rates to nearly zero and is likely to keep them there for a while. At the same time, it continues to buy reams of bonds to support markets and the economy.

Investors are waiting to hear from Fed Chair Jerome Powell later this week at a speech that he would normally give at Jackson Hole, Wyoming. But the 2020 economic policy symposium will be online.

Investors closely follow speeches given at the annual Jackson Hole event, where Fed officials in the past have made huge market-moving headlines. This year’s event is titled “Navigating the Decade Ahead: Implications for Monetary Policy.”

Meanwhile, some big names in the Dow Jones Industrial Average are slated to be dropped from the 30-company index. Exxon Mobil, Pfizer and Raytheon Technologies will be replaced before trading opens next Monday by Salesforce.com, Amgen and Honeywell International, S&P Dow Jones Indices said late Monday.

Exxon has been the longest-running member of the Dow. It was first added to the index in 1928 when the oil giant was still named Standard Oil of New Jersey. The company changed its name to Exxon in 1972.