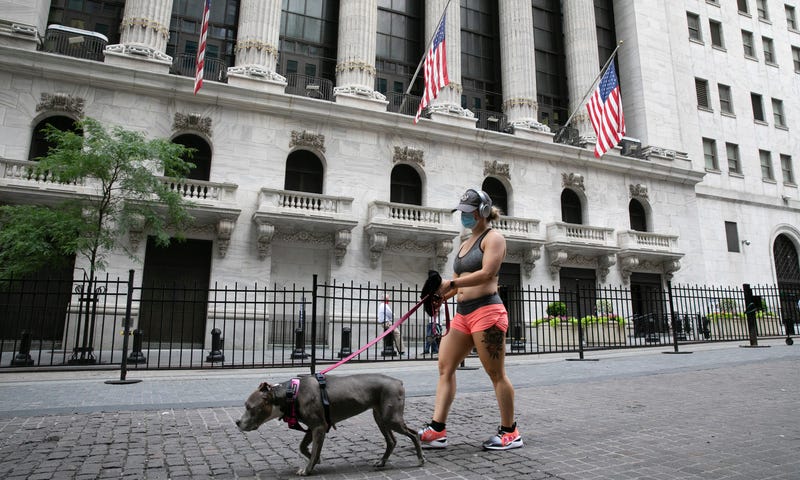 Photo credit FILE - A woman wearing a mask walks her dog past the New York Stock Exchange, Tuesday, June 30, 2020. Stocks are drifting in early trading on Wall Street Thursday, Aug. 6, after a report suggested that the number of layoffs across the country is slowing, though it remains incredibly high. (AP Photo/Mark Lennihan)
By The Associated Press

NEW YORK (AP) — Stocks are perking higher on Wall Street Thursday after a report showed the pace of layoffs across the country is slowing, though it remains incredibly high.

The S&P 500 was up 0.6% in afternoon trading after spending much of the day waffling between smaller gains and losses. It's on pace for its fifth straight winning day, and it's rallied back to within 1.2% of its record high set in February. .

The Dow Jones Industrial Average was up 174 points, or 0.6%, at 27,375, as of 2:53 p.m. Eastern time, as investors also waited for Congress and the White House to reach a hoped-for deal on more aid for the economy. The Nasdaq composite was up 0.9% and headed for another record.

The day’s headline economic report showed that nearly 1.2 million workers applied for unemployment benefits last week. It would have been an astounding number before the coronavirus pandemic leveled the economy. But it’s a slowdown from the prior week’s slightly more than 1.4 million, and it was also not as bad as economists were expecting.

The easing in claims was the first after two weeks of increases, and economists called it an encouraging step. But the threat of more business closures due to the continuing pandemic means the path remains treacherous.

Investors have been pushing stocks higher despite such worries, in part on expectations that Washington will work through partisan disagreements and strike a deal on more assistance for out-of-work Americans, along with other measures.

Investors say it’s crucial that the aid comes, and quickly, after $600 weekly in jobless benefits from the U.S. government recently expired. The economy has shown signs of improvement since the spring, but it’s still hobbling, and worries are high that it may backtrack amid a resurgence in coronavirus counts.

Democrats and Republicans traded criticism of each other on Thursday, following a Wednesday session that produced no progress. Negotiations are continuing, and both sides have set a goal of reaching a deal by week’s end, though that is appearing increasingly out of reach.

Despite the market's gains, slightly more stocks in the S&P 500 were falling than rising, with the health care sector the heaviest weight on the index. Becton Dickinson sank 8.9% after it gave a forecast for earnings this fiscal year that fell short of analysts' expectations.

Western Digital, which makes hard disks and other storage for electronics, slumped 16% for the largest loss in the S&P 500 after it gave a profit forecast for the current quarter that wasn't as strong as Wall Street's.

More gains for Apple helped to lift the market. The iPhone maker reported blowout profits for the spring a week ago, and its stock has climbed every day since then. The gains have been so strong that it may become the country’s first company to be worth $2 trillion. After rising 3.5%, it’s at roughly $1.93 trillion.

Sealed Air, the company behind Bubble Wrap and Cryovac packaging, rose 8.9% for one of the biggest gains in the S&P 500 after it reported stronger earnings for the latest quarter than analysts forecast. It also gave a better-than-expected forecast for earnings this year.

The yield on the 10-year Treasury dipped to 0.53% from 0.54% late Wednesday. It pared a steeper drop from the morning, but it remains very low amid worries about the economy and as the Federal Reserve has pinned short-term rates at record lows.

Some analysts have been concerned about the wide disconnect between the bond market, which is still showing so much caution, and the stock market, which has rallied back toward record heights. Even though the stock market is not the economy — it's increasingly dominated by a handful of Big Tech companies that can profit even during a pandemic, and profit is what drives stock prices in the long run — critics say the degree of the gap between them is concerning.

Gold also continued its record run as investors looked for safety. Gold for delivery in December rose $20.10 to settle at $2,069.40 per ounce.