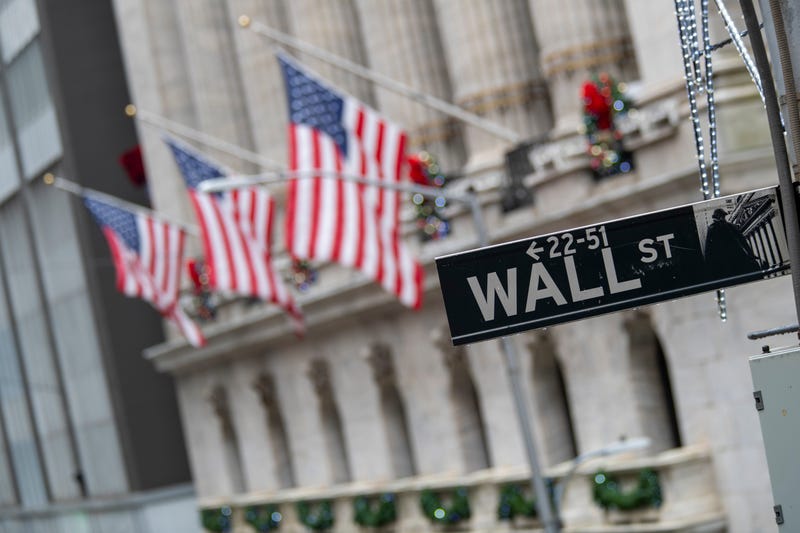 Photo credit FILE - In this Jan. 3, 2020 file photo, the Wall St. street sign is framed by American flags flying outside the New York Stock Exchange in New York. Stocks are falling early on Wall Street Thursday, Sept. 17, as the late selling from the previous day carries over. (AP Photo/Mary Altaffer, File)
By The Associated Press

Another slide in technology companies helped pull stocks lower on Wall Street Thursday, extending losses from the day before.

The S&P 500 lost 0.8% after having been down 1.7% earlier. The selling was widespread, with eight of the 11 sectors that make up the benchmark index ending the day lower. The sectors that include Amazon, Facebook and Apple took the heaviest losses.

The selling came a day after the Federal Reserve said it will keep interest rates at nearly zero for years to support the wheezing economy. The statement failed to encourage Wall Street and the S&P 500 recorded its first loss in four days Wednesday.

Low interest rates are usually a boon for investors, sending stocks soaring. So why the sell-off? Analysts gave varying reasons for the market’s weakness. Among them: the gloomy outlook Fed Chair Jerome Powell gave for the economy’s prospects and built-up expectations by some that the Fed would be even more generous with its stimulus. It isn’t the first hangover stocks have suffered following a rate announcement by the Fed.

“The market really got a bunch of nothing from the Fed,” said Shawn Cruz, senior market strategist at TD Ameritrade. “Maybe that would be OK if we were continuing along with the recovery, but the recovery is starting to decelerate.”

The sell-off cut into the market's gains this week on Monday and Tuesday. The S&P 500 is still up 0.5% for the week, but down 4.1% so far this month after five-straight monthly gains.

Another possibility for the downward turn the market has taken the past two days is the diminishing odds that Congress will deliver more aid for the economy anytime soon after benefits for unemployed workers and other stimulus expired recently. Investors say such aid is crucial for the recovery, and Powell talked about the importance of it in a press conference Wednesday.

The Fed’s actions in the wake of the economic slump, along with any further actions, could have a diminishing impact and the latest statements may be a “warning shot across the bow of Congress that they need to do something,” Cruz said.

A report on Thursday showed that another 860,000 workers applied for unemployment benefits last week. But partisan disagreements on Capitol Hill have delayed any renewal of Congressional support.

“Fundamentally, the economy is still moving in the right direction, but the risk of potentially jeopardizing the recovery from reduced fiscal support is becoming uncomfortably high,” Piper Sandler strategist Craig Johnson wrote in a report.

Economists say the impact of Congress’ inaction may already be showing in the data. Retail sales growth weakened last month, for example, as unemployed workers were no longer getting $600 in extra weekly benefits from the federal government. President Donald Trump issued an executive order in early August to provide a scaled-back version of the benefits, but that program is expiring.

Trump urged his fellow Republicans on Wednesday to move toward a big package of aid, which is what Democrats have been arguing for, but negotiations remain far apart.

“People are starting to realize that it does have a pretty big impact to not have that extra money coming in that got cut off at the end of July,” said Sal Bruno, chief investment officer of IndexIQ. “We’ll see if they do get a fiscal package done. If they don’t get it done by the end of this month, the odds go down dramatically.”

The number of workers applying for jobless benefits has been coming down slowly, but it remains historically high.

The high unemployment figures, along with other signs of a weaker recovery and a potential second wave of the virus, are weighing on investors.

“You put that alongside the Fed starting to pull back the punch bowl, or at least not refill it as much as people wanted, it‘s enough to spook markets,” TD Ameritrade's Cruz said.

Big Tech stocks were again at the center of Wall Street's selling. After flying through the pandemic on expectations that their strong growth will only continue, Apple and other superstar stocks suddenly lost momentum earlier this month amid worries they had become too expensive.

Among the gainers was Herman Miller, which jumped 33.5% after reporting much stronger profit for its latest quarter than analysts expected. It benefited from a rush of people buying furniture for home offices they had to suddenly set up due to the pandemic.

Treasury yields fell in a sign of increased caution in the market. The yield on the 10-year Treasury held steady at 0.69%.

Stocks in markets around the world closed lower.