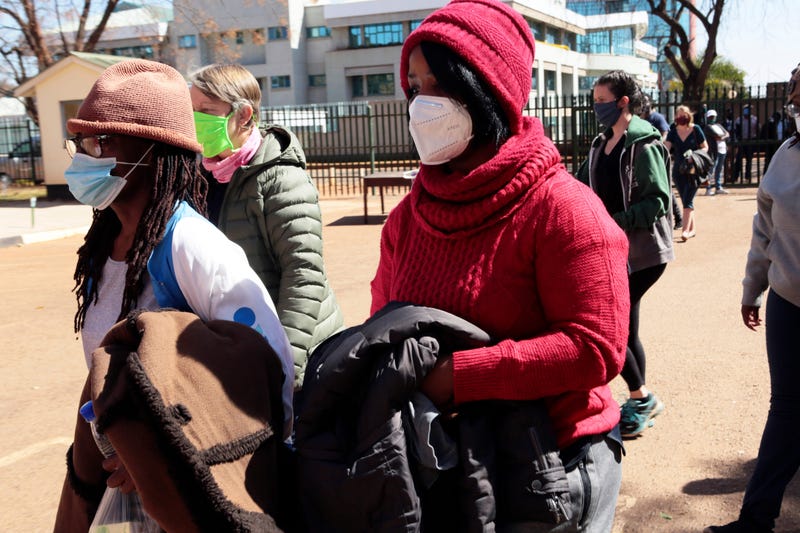 Photo credit Tsitsi Dangerembga, left, prominent Zimbabwean author and Fadzayi Mahere, right, spokeswoman for the main opposition party, appear at the magistrates courts with others in Harare, Saturday, Aug, 1, 2020. Police arrested scores of people in Harare and other towns in Friday's protests according to the Zimbabwe Lawyers for Human Rights. (AP Photo/Tsvangirayi Mukwazhi)
By The Associated Press

HARARE, Zimbabwe (AP) — An internationally known Zimbabwean author and several other people have been released on bail on Saturday, after spending a night in police cells for protesting against the government.

The activists included writer Tsitsi Dangarembga and Fadzayi Mahere, the spokeswoman of the main opposition MDC Alliance party. Dangarembga is the author of the bestselling novel, “Nervous Conditions,” and has recently published a sequel, “This Mournable Body,” which has received notable reviews and has been nominated for top awards.

They were among scores of people who tried to hold low-key protests after military and police shut down the country’s major cities and towns and forced people to stay indoors Friday.

Those who were arrested spent a night in detention. They are accused of “participating in a gathering with the intention to incite public violence or bigotry” and also with violating lockdown regulations that outlaw “unnecessary movements.”

The activists were ordered to surrender their passports and report to the police once a week as bail conditions until the case is finalized.

President Emmerson Mnangagwa has described the planned protest as “an insurrection to overthrow our democratically elected government.”

Tensions are rising in Zimbabwe as the economy implodes with inflation of more than 700%, the second highest in the world. Now the coronavirus burdens the threadbare health system. Zimbabwe's agriculture minister died of COVID-19 earlier this week.

Mnangagwa’s government is accused of using COVID-19 as a cover to clamp down on dissent. The opposition and human rights groups have said they witnessed abuses such as arrests, detentions, beatings and the stalking of activists and ordinary people accused of violating the lockdown ahead of the planned protest.

Police and government spokespeople have dismissed the allegations, even as a prominent journalist and a politician behind the protest have spent close to two weeks in detention.

In Bulawayo, Zimbabwe's second largest city, the High Court on Saturday ordered the police to “produce” within 72 hours Tawanda Muchehiwa, the nephew of investigative journalist Mduduzi Mathuthu. Police took Muchehiwa into custody on Thursday after failing to find Mathuthu, whom they wanted to arrest, said his lawyers.

Mathuthu has recently reported on alleged corruption linked to purchases of supplies to battle COVID-19.