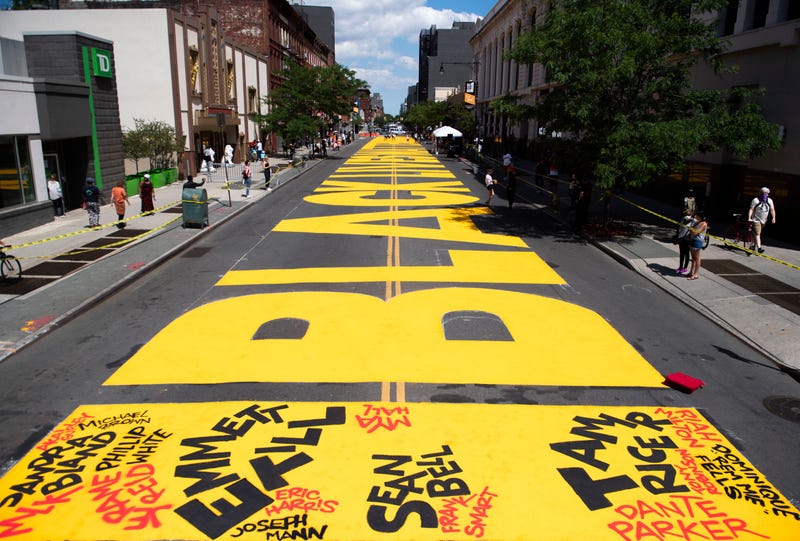 NEW YORK (1010 WINS) -- Volunteers painted a “Black Lives Matter” mural on a Bedford-Stuyvesant street this past weekend — and the block will become a pedestrian plaza during the summer months, Mayor Bill de Blasio said Monday.

Artist Dawud West, Brooklyn Councilman Robert Cornegy, Jr. and a group of volunteers painted the 375-foot mural on Fulton Street, between Marcy and Brooklyn avenues, over the weekend.

On Monday, de Blasio said the city was in the process of “making the block pedestrians-only and working with the MTA to coordinate nearby transit" for the duration of the summer.

“Fulton Street in Brooklyn will share the message that #BlackLivesMatter all summer long,” he tweeted.

JUST IN: Fulton Street in Brooklyn will share the message that #BlackLivesMatter all summer long. We're making the block pedestrians-only and working with the MTA to coordinate nearby transit.https://t.co/WO0raIrJaq

The Fulton Street mural was inspired by a “Black Lives Matter” mural painted on a street near the White House in Washington, D.C.

“That was sort of the inspiration for what we did," Cornegy told 1010 WINS over the weekend. "So we did similar length, similar color, but we did it here in a historically black community, which is Bedford-Stuyvesant and northern Crown Heights.”

It is not a part of de Blasio’s separate plan to paint “Black Lives Matter” on one street in each of the five boroughs, according to the New York Post.

As part of the mayor’s initiative, all five streets will be co-named “Black Lives Matter Way.”