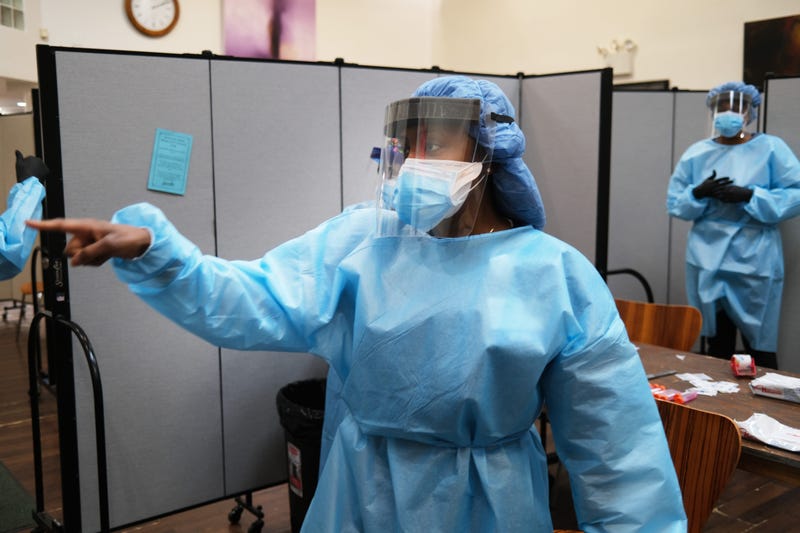 NEW YORK (1010 WINS) -- Mayor Bill de Blasio said Wednesday that the city is offering thousands of coronavirus tests and hundreds of additional personnel to hard-hit nursing homes as the city builds a large stockpile of personal protective equipment to plan for the months ahead.

The additional tests and personnel are part of a four-part plan by the city to address the needs of older residents, who have been particularly vulnerable to the outbreak, de Blasio said.

There will be a “two-week blitz” in testing at nursing homes in the coming days followed by regular weekly testing for residents, de Blasio said.

The mayor also announced that 240 personnel are heading to nursing homes across the city to fill staff shortages. With mandatory testing of nursing home staff across the city, some staff members will inevitably be out of work for a required 14-day quarantine, leading to shortages, de Blasio said. The hundreds of personnel will help fill those roles.

As part of step three of the plan, the city is sending 10 outbreak response teams to nursing homes to oversee their response. The teams will include experts in infection control, mental health and social work.

Step four of the plan is a shift to home-based care for seniors; the plan will “reprogram our city towards much more focus on helping our seniors stay home,” de Blasio said.

“We’re going to look at how to maximize home-based care rather than nursing home care so we can support our seniors better,” the mayor said.

At his daily briefing, de Blasio also said the city is building a stockpile of personal protective equipment. The stockpile will provide PPE to hospitals, nursing homes and funeral homes, as well as the FDNY, NYPD, EMS and OCME.

Once a 14-day stock is secured, the city will begin building a 90-day supply of PPE, which de Blasio said the city hopes to have by the end of the year. That will include 4,000 full-service ventilators.

De Blasio also encouraged caretakers to get their children vaccinated. He said vaccination rates have been falling during the pandemic, with fewer doctors’ offices open and families staying at home.

There have been 63 percent less vaccines given to kids during the outbreak, de Blasio warned.

De Blasio said vaccines are essential to kids’ health and that kids who aren’t vaccinated are more vulnerable to getting and having severe effects from COVID-19.

De Blasio said vaccines are being offered at more than 1,000 New York City facilities. Caretakers can make an appointment at 844-NYC-4NYC.

The mayor also urged New Yorkers to fill out their census forms as the city pushes for more federal funding to help with the coronavirus outbreak. He warned the city could lose billions of dollars if it's representation is not reflected accurately.

"We are right now fighting a fight in Washington to make sure the needs of New York City are seen and heard and felt by those that represent us in Washington," de Blasio said. "The 2020 Census will have so much to say about the future of this city and it's being attempted against the backdrop of the biggest crisis we've dealt with in generations. And we're the epicenter. So we're really up against a wall here yet again, and we've got to find a way forward and quickly."

De Blasio said the city anticipates it could get $650 billion from the federal government, but that amount hinges on people filling out their census forms. The mayor said only 49 percent of New York City households have submitted their census response compared to a national average of 59 percent.

"Although there is so much going on, and there has been so much effort to get to that 49 percent, we've all got to double down," de Blasio said.

Asked about the New York City Marathon and Fourth of July celebration, de Blasio said it was "too early to come to any conclusions" for the marathon, but the city is working closely with the New York Road Runners, which holds the event.

As for the Fourth of July, de Blasio said there will be fireworks and Macy's will be involved and "that’s all we know so far."

"Do not assume it will look like what we’ve done in the past," de Blasio said. "It might look very, very different, but there’s plenty of time to work that out and announce it over the weeks ahead."

When it comes to daily metrics tracking COVID-19, de Blasio said the number of people admitted to hospitals for suspected COVID-19 was up from 57 to 63.

The percentage of people tested who were positive for COVID-19 citywide dropped from 9 percent to 8 percent, the mayor said.

Among the deaths are 16,059 confirmed deaths and 4,828 "probable" deaths, meaning the cause of death was reported as "COVID-19" but no lab test has confirmed it.