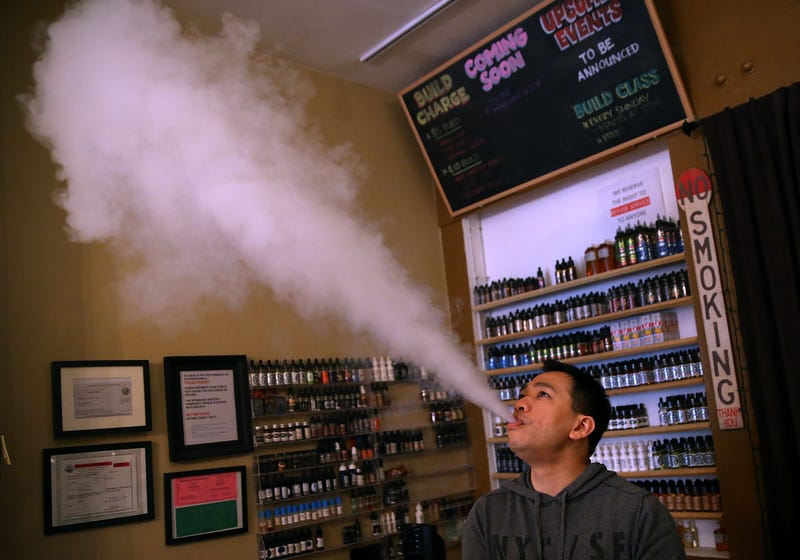 ALBANY (1010 WINS/AP) – New York is a step closer to banning the sale of flavored vaping products after Gov. Andrew Cuomo announced an emergency executive order Sunday that would prohibit the flavors on the grounds that they pose a public health emergency.

Cuomo said he is "not waiting for the federal government to come protect the people of New York" and is directing health officials to ban the sale of flavored vaping products across the state. He accused the manufacturers of flavored e-cigarettes of targeting youth.

The governor says the state’s Health Department commissioner, Dr. Howard Zucker, is holding an emergency meeting this week to recommend the ban to the Public Health and Health Planning Council. The ban could go into effect in as little as two weeks.

“Dr. Zucker is recommending that the ban be put into effects immediately through what is called an emergency regulation as part of a declaration of a health emergency,” Cuomo said Sunday.

The executive action would not ban tobacco or menthol vaping products.

BREAKING: Today I am announcing emergency executive action to ban the sale of flavored e-cigarettes.

Cuomo said state police and the Health Department will enforce efforts against retailers who sell to underage buyers.

"Those retailers are now on notice that we are ramping up enforcement and they will be caught and prosecuted," Cuomo said, adding that retailers will now face criminal penalties in addition to civil penalties.

American Lung Association President Harold Wimmer said "the Governor had the opportunity to take decisive action, but instead left menthol e-cigarettes on the marketplace."

At a rally of parents and students in front of the Education Department's headquarters Sunday, parents and students called on the city to pass a bill by Council Member Mark Levine that would ban the sale of flavored e-cigarettes, even though President Trump has promised something similar.

"We're not going to rely on them, and I certainly don't trust a word that comes out of his mouth," Levine said.

Seventh grader Yael Mintz was at the rally. She said she sees a lot of students vaping in middle school bathrooms.

"There have been jokes about the bathroom being called the JUUL room because that’s what people go into the bathroom for just to get rid of their JUUL craving," Mintz said.

Major e-cigarette manufacturer JUUL Labs responded to the action by Cuomo in a statement Sunday, saying it has already taken actions in New York, like pulling all flavors except tobacco and menthol from traditional retail stores in November. It said it has never marketed to youth and does not sell flavors like bubble gum that are especially appealing to young people.

"We will review today’s announcement as we strongly agree with the need for aggressive category-wide action on flavored products," the statement from JUUL reads. "That is why we already stopped selling our non-tobacco/non-menthol based JUULpods to traditional retail stores, are fighting against counterfeit and compatible products made with unknown ingredients under unknown manufacturing standards, and will fully comply with local laws and the final FDA policy when effective."

Last week, New York expanded anti-tobacco initiatives to discourage the use of vaping devices and e-cigarettes too.Cuomo on Thursday signed an executive order directing state agencies overseeing anti-tobacco programs to address the newer methods of tobacco use.Cuomo also signed into law a mandate that state anti-tobacco campaigns include vaping as well as traditional tobacco.Cuomo, a Democrat, signed legislation in July raising the statewide smoking age to 21. Earlier this week he announced plans to require health warning posters in shops selling vaping products.He says the new emphasis on the risks of e-cigarettes reflects the state's efforts to prevent young people from getting addicted.

The changes come as public health officials around the nation investigate hundreds of lung illnesses believed to be related to vaping.

Doctors say the illnesses resemble an inhalation injury, with the body apparently reacting to a caustic substance that someone breathed in. Symptoms have included shortness of breath, fatigue, chest pain, diarrhea and vomiting. Health officials said Thursday that 380 confirmed cases and probable cases have been reported in 36 states and one U.S. territory. That marks a decrease from the 450 cited two weeks ago, when officials were also including "possible" cases.

No single device, liquid or ingredient has been identified as the cause, and health officials are advising people not to vape at all until more is known.

New York officials have been focused on a substance called vitamin E acetate, which recently has been used as a thickener, particularly in black market vape cartridges that also contain THC.

On Thursday, the state's Public Health and Health Planning Council passed emergency regulations to require stores that sell vaping products there to post signs on the dangers of using illegal vaping products.

Also this week, the government shared preliminary new data on the growing popularity of vaping in adolescents.

Nearly 28 percent of U.S. adolescents surveyed this year said say they vaped at least once in the last 30 days, the government said. That's up from about 21 percent in 2018, and 12 percent the year before.

E-cigarettes generally have been considered less dangerous than regular cigarettes, but health officials have warned that nicotine is harmful to developing brains.