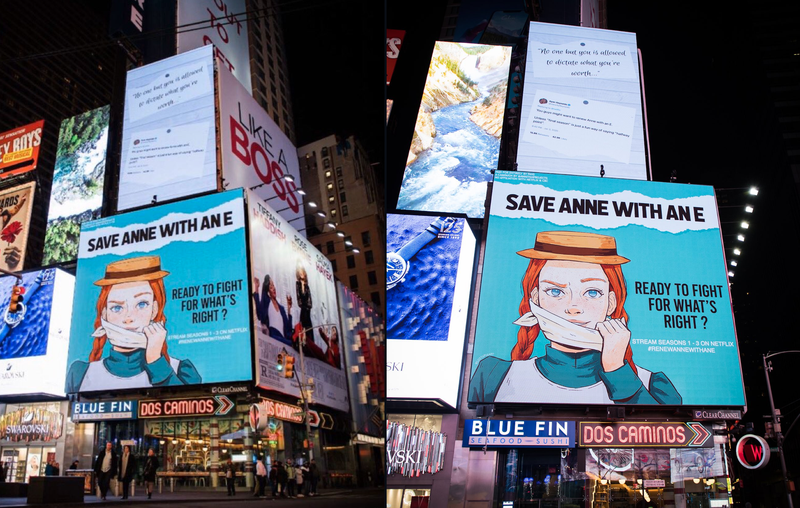 NEW YORK (1010 WINS) – Fans of the Netflix show “Anne with an E” are trying to save the show after it was canceled following three seasons—and they’ve even bought ad space in Times Square to alert the masses.

The cancelation of the show, which is about the novel "Anne of Green Gables," prompted fans to create and fund an electronic billboard that is now up in the Crossroads of the World. It features protesting her right to free speech in a scene from season three.

The billboard in Times Square was put up Friday but will have to be removed Saturday night because organizers can’t afford to keep it up. A similar billboard was put up in Toronto last week.

We are so happy to say that we have two billboards in two different countries. Anne nation is all around the world and we are a strong fandom. Congrats to you all! This wouldn’t have been possible without your passion 🙏🏼💗 #awaebillboard

Fans have used the hashtag #RenewAnneWithAnE in their push to get Netflix execs to bring the show back. The hashtag was globally trending on Twitter after the cancellation, and even celebs like Ryan Reynolds and Sam Smith tweeted their support.

Fans are hoping all the attention will get more people streaming the show. The account @awaefanprojects is keeping people updated about the endeavor.

Excellent shots of our #awaebillboard in Times Square!!

“Anne with an E was definitely a show that attracts passionate people,” Sadler told 1010 WINS. “I think because the protagonist is so interesting and passionate. So I’m not surprised that we’ve all cared this much, because it really is a show if you connect with it you connect with it quite deeply.”

1010 WINS has reached out to Netflix for comment but has not yet heard back.