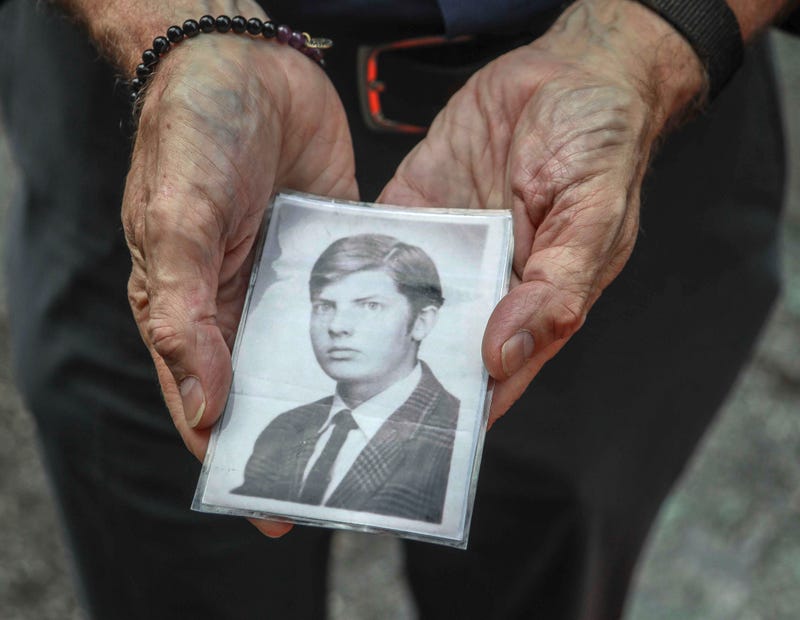 Photo credit In this Wednesday, Aug. 7, 2019 photo, Brian Toale shows a photo of himself at 16 years old in New York. Thousands of people who say they were molested as children in New York state will head to court this week to file lawsuits against their alleged abusers and the institutions where they worked. Toale, 66, who says he was molested by an employee at a Catholic high school he attended on Long Island, was one of the leaders in the fight to pass the Child Victims Act. (AP Photo/Bebeto Matthews)
By 1010 WINS

ALBANY, N.Y. (AP) — It was the early 1950s and Peter Vajda was a little boy attending a Catholic boarding school in the Bronx when he says a religious brother molested him.

The brother is likely long dead, but the church survives. Just after midnight Wednesday morning, Vajda, now 75, filed a civil lawsuit naming the Archdiocese of New York as a defendant. Justice, he says, may have been delayed but he won't let it be denied.

"Now it's their turn. Now it's their time," he told The Associated Press Monday. "And I want them to get everything they deserve in the way of punishment."

Wednesday marked the start of a one-year litigation window in New York allowing people to file civil lawsuits that had previously been barred by the state's statute of limitations, which was one of the nation's most restrictive before lawmakers relaxed it this year.

Hundreds, likely thousands of lawsuits were expected to be filed on the first day. The Catholic Church, the Boy Scouts of America, public school districts and possibly even deceased financier Jeffrey Epstein are among the likely targets.

"This is a momentous time for courageous survivors who have waited so long for justice in New York," said Jeff Anderson, an attorney whose firm, New York-based Jeff Anderson & Associates, plans to file hundreds of civil molestation lawsuits Wednesday on behalf of clients.

Institutions that have long cared for children — such as the Catholic Church and the Boy Scouts, as well as private and public schools and hospitals — are girding for what could be a devastating financial blow. A similar law passed in 2002 in California resulted in Catholic dioceses there paying $1.2 billion in legal settlements.