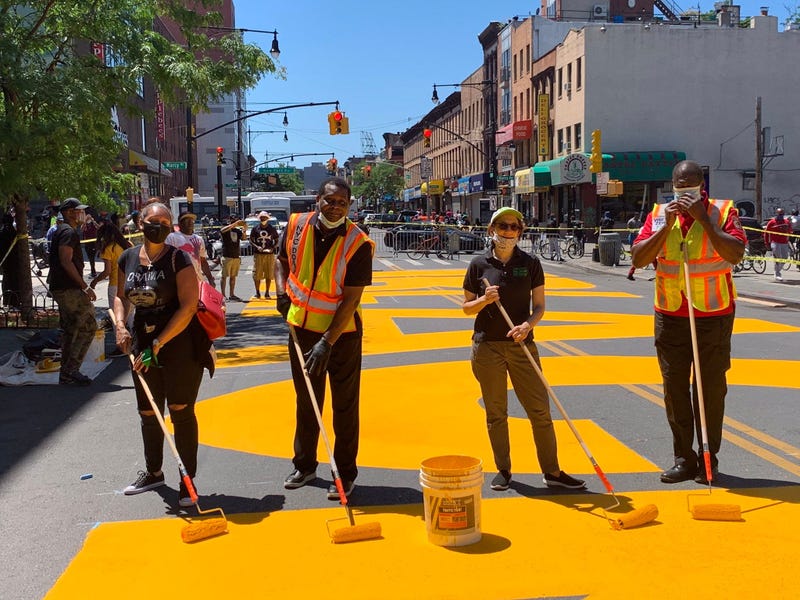 NEW YORK (1010 WINS) – Artists joined elected leaders and members of the community this weekend to paint a giant Black Lives Matter mural on a Brooklyn street.

Council Member Robert Cornegy Jr. told 1010 WINS the mural was inspired by a similar one painted near the White House this month.

“Reminiscent of the mural that was painted in Washington, D.C. on the street leading up to the White House,” Cornegy Jr. said. “That was sort of the inspiration for what we did. So we did similar length, similar color, but we did it here in a historically black community, which is Bedford-Stuyvesant and northern Crown Heights.”

The mural is on Fulton Street, between Marcy and Brooklyn avenues.

Spike Lee and I on Fulton St. in Brooklyn for the renaming of the block as #BlackLivesMatter Way. pic.twitter.com/KmGE96ebgu

State Attorney General Letitia James and the Rev. Al Sharpton were among the people who helped create the piece.

“It’s not a static piece of art. The artists allowed anyone who wanted to participate to grab a roller and fill in spaces,” Cornegy Jr. said. “So it actually became a symbol of ownership for the community. So it’s not something that people can possibly walk by, because most of the community or a lot of the community have participated in its creation.”