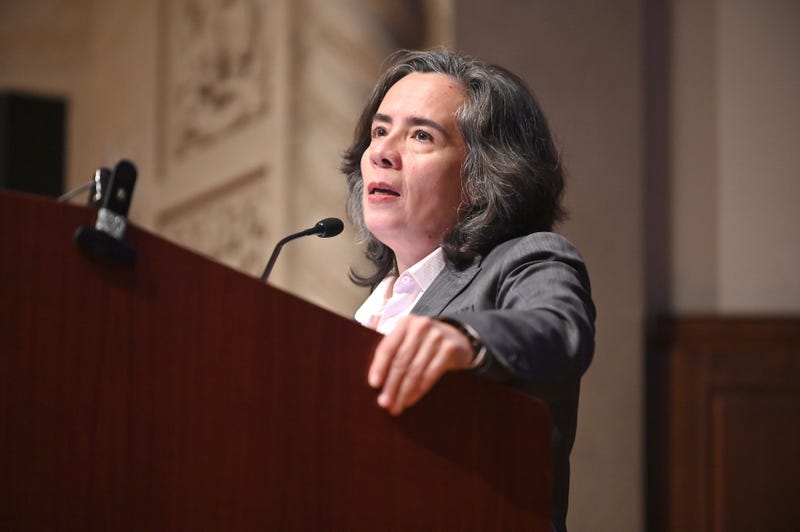 NEW YORK (1010 WINS) – Police union officials and several elected leaders are calling on city Health Commissioner Dr. Oxiris Barbot to lose her job after she reportedly told a top police official she didn’t “give two rats’ a***s” about getting officers 500,000 surgical masks amid the coronavirus outbreak. One police union even called Barbot a “b****” in response, leading to a strong rebuke from Mayor Bill de Blasio.

When asked for 500,000 masks for the NYPD, Barbot reportedly told Monahan she could only give him 50,000 masks

“I don’t give two rats’ a***s about your cops,” Barbot said to Monahan in what the Health Department described as a “heated exchange.”

“I need them for others,” Barbot said of the masks.

A source told the Post there was then a “very tense moment” at Brooklyn’s Office of Emergency Management in March when Monahan told de Blasio in front of Barbot that the NYPD hadn’t gotten the personal protective equipment it needed “for weeks.”

“Oxiris, what is he talking about?” de Blasio reportedly said to Barbot.

“You definitely need it,” the mayor told Monahan of the PPE before saying, “Oxiris, you’re going to fix this right now.”

The Health Department said Barbot has since apologized and that Monahan accepted her apology.

"Dr. Barbot and Chief Monahan have a good working relationship. During the height of COVID, while our hospitals were battling to keep patients alive, there was a heated exchange between the two where things were said out of frustration but no harm was wished on anyone,” the Health Department said in a statement. “The Commissioner apologized for her contribution to the exchange, the apology was accepted and agreement was arrived between the two to ensure that respirators were delivered to members of the force. This has always been about saving the lives of our healthcare workers, police officers and every New Yorker who is fighting through this pandemic.”

NYPD Commissioner Dermot Shea reacted to the controversy in an interview with WPIX on Thursday morning. He said he is not calling for Barbot’s resignation.

“When you read that headline, that’s very disturbing. But what was actually said? What was the context? What was the discussion between two people both that are trying to do the best in a bad situation?” Shea said. “So I think it’s a little preliminary.”

When asked about the issue at his daily briefing Thursday, de Blasio said he first heard about it Wednesday night and that the comment was not made in his presence.

"No public servant should ever, in any way, say anything disrespectful about the men and women of the NYPD," de Blasio said. "They protect us, we need to protect them. To me it would be inappropriate for anyone, particularly in a leadership role, to suggest any lack of interest in protecting the men and women of the NYPD. That would be to me a real inappropriate statement."

The mayor also said Barbot should apologize to NYPD officers if the reports about her comment are true.

"If what is being reported is accurate, the commissioner needs to apologize to the men and women of the NYPD, unquestionably," de Blasio said. "But again I need to hear her perspective, I need to hear Chief Monahan's perspective."

A Daily News reporter told de Blasio that a source said Barbot made the comment because the NYPD was trying to "commandeer" masks that were meant for health care workers.

"I do know that whatever the scenario was, it is crucial that our first responders have PPEs period and obviously that our health care workers have PPEs," de Blasio told the reporter. "So there's no either/or here."

"The bigger question of was the distribution happening to the NYPD in the number they need and the timing they need, when I heard there was some kind of problem or delay, I stepped in to make sure it was corrected," de Blasio said. "Because remember on top of everything else, the NYPD was short-staffed, a huge number of people were sick, we were asking so much of the officers on duty. It was crucial to provide them with the protection that was available. I don’t know the specifics of the context you are suggesting, but I can tell you that what everyone had to do was figure out a way to distribute fairly to everyone involved because there was no choosing among people. Both first responders and health care workers needed help.”

Barbot's apology to Monahan wasn't enough for police union officials and some politicians, who called on Barbot to lose her job.

Among them was Patrick Lynch, president of the Patrolmen's Benevolent Association, who called Barbot’s comments “despicable and unforgivable.” He said she “MUST resign or be fired immediately.”

“Dr. Barbot should be forced to look in the eye of every police family who lost a hero to this virus. Look them in the eye and tell them they aren’t worth a rat’s a**,” Lynch said in a statement.

Despicable and unforgivable. Dr. Barbot should be forced to look in the eye of every police family who lost a hero to this virus. Look them in the eye and tell them they aren’t worth a rat’s ass.https://t.co/i7vYHTjfAf

Ed Mullins, the president of the Sergeants Benevolent Association, also reacted in a statement.

“I am not surprised by such vile words coming from an appointee of Mayor de Blasio, whose disdain for law enforcement is legendary," said Mullins. "But Dr. Barbot's comments make it clear she has no personal or professional regard for the police. The primary concern of a medical professional in such an important position should be the safety of all people, and her attitude places police officers in great jeopardy and makes her unfit for the job."

The following press release was sent out this evening, within an hour of a NY Post article being published online. The comments made by Dr. Barbot, an appointee of Mayor de Blasio, are despicable, and will not be tolerated. Stay safe and remain steadfast and vigilant. pic.twitter.com/FsdtBHKFEp

And the Twitter account of the Sergeants Benevolent Association lit up Wednesday in reaction to Barbot’s comments.

“Truth is this b**** has blood on her hands but why should anyone be surprised the NYPD has suffered under DeBlasio since he became Mayor,” one unattributed tweet from the union reads.

Truth is this bitch has blood on her hands but why should anyone be surprised the NYPD has suffered under DeBlasio since he became Mayor. https://t.co/lFGQJnBJoQ

De Blasio condemned the tweet at his daily briefing, calling it "misogynist and unacceptable."

"What the SBA is saying, what Ed Mullins is saying or authorizing, is absolutely unacceptable," de Blasio said. "He should apologize, but he never does. That language is misogynist and unacceptable, and I have learned long ago that so much of what comes out of the SBA is divisive and meant to set this city back. I don’t know how an organization could be so consistently negative towards its own city and towards its own people, but that’s what they do. But, no, that’s absolutely unacceptable. And as I said, two wrongs do not make a right. So that language should be condemned. And I think everyone needs to focus on trying to—in the middle of this crisis—being respectful and trying to work together and not divide people. So I absolutely condemn that language."

Congressman Max Rose was among the politicians who denounced Barbot’s comments.

“This kind of attitude explains so much about City Hall’s overall response to this crisis. Dr. Barbot shouldn’t resign, she should be fired,” he wrote on Twitter.

Another takeaway. This confirms what many assumed, that the de Blasio administration had just about nothing under control when the pandemic got dicey https://t.co/ARUkvBbHoL

“I judged the mayor incorrectly for shifting duties away from her if this is how she feels about her job,” he said, according to the New York Post.

There have been 5,490 coronavirus cases among the NYPD's 55,000 sworn and civilian members, with 41 of them succumbing to the illness.