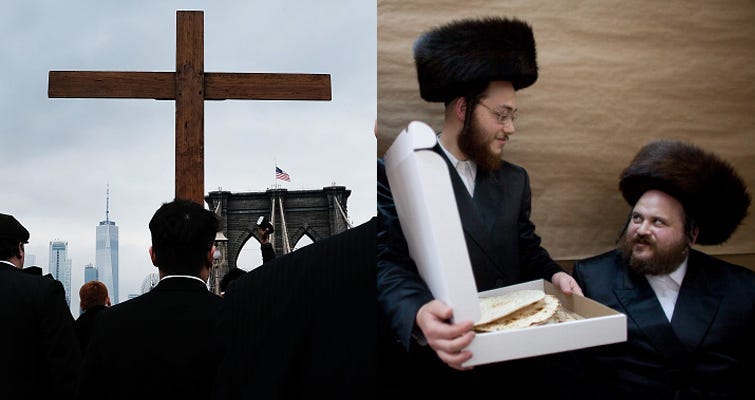 NEW YORK (1010 WINS) -- A lot of people have plans for this weekend, with Easter and Passover going on.

It began in New York with the annual 'Way Of The Cross' procession over the Brooklyn Bridge for Good Friday.

"I think it's really beautiful because I always am surprised by how people embrace it, and they always join in and walk with us," she said.

One of the stops was the World Trade Center site. Brooklyn's Bishop DeMarzio said it's important to be there.

"Jesus' life was an innocent life, and so too were the people who died in 9/11, the first responders, and the people in the towers," he said.

He said it's a time to pray and remember the sacrifice made.

#video Way of the Cross over the #BrooklynBridge #GoodFriday #1010WINS pic.twitter.com/U499N39YXg

In Paris, Notre Dame Cathedral was obviously unavailable for Good Friday services. Instead, they moved outside.

There had been some question about whether the crown of thorns that was worn by Jesus during his crucifixion might be brought out for the ceremony, that will not happen because of security reasons.

A big crowd was expected at the service.

This year, Easter coincides with Passover, and the first seder is Friday night.

There is concern that Passover gatherings could contribute to the spread of measles in the local hasidic community. It's leading some Jews to exclude others from their celebrations.

"Say you have six kids that want to come to the Seder, with all the grandchildren," said Eli Banash, 32, a member of the Orthodox community. "Grandmother wants everybody to come. One family didn't vaccinate the kids. Five did. The five families are saying, 'We're not coming unless they don't come!' With Passover, it's going to intensify."

There have been 359 cases of measles confirmed in Brooklyn and Queens.

Dr. Barbot says measles' long incubation period means things will get worse before they get better.

1010 WINS' Roger Stern was at Ben's Deli which supplies food for at least 900 of them in the New York area.

"You start bringing in the dry products and the paper goods and all that stuff maybe two, three weeks beforehand. The actual cooking and the prep starts, mostly about three or four days ago is when we start the heavy, and then the last two days is basically when we do everything," General Manager Kevin Eckles said.

Many Jews eat chicken or brisket with a Passover plate at the center of their table consisting of horseradish, a lamb shank, and green vegetables to symbolize their escape from slavery in Egypt.

We're expected to get some wet and windy weather over the holiday weekend.

AccuWeather says a flash flood watch has been canceled for the city but remains in effect until 8 p.m. Saturday in Suffolk County.

The rain had mostly cleared out of the city and surrounding suburbs by afternoon.

The rest of Saturday will be breezy and mild with some showers and a high of 66.

Easter Sunday will bring early sunshine that give way to clouds and an occasional shower. The high will be 66, according to AccuWeather.