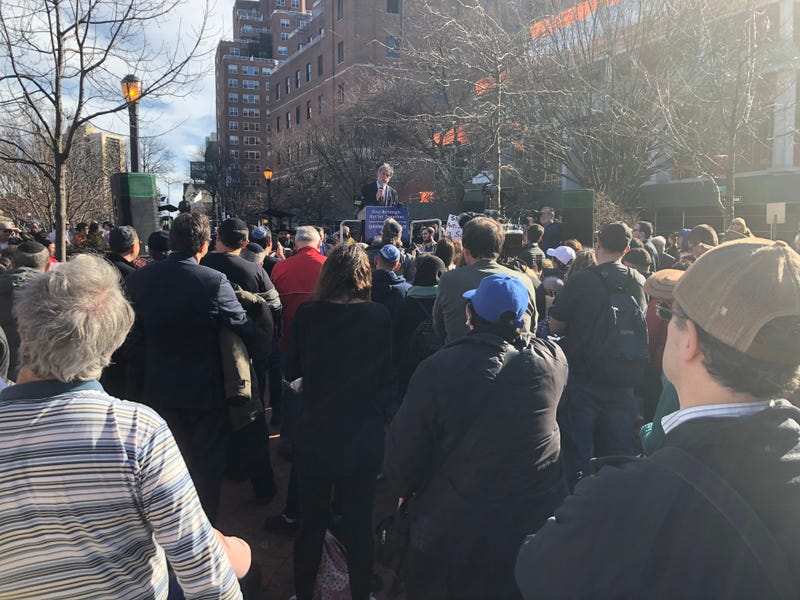 NEW YORK (1010 WINS) – Hundreds of people turned out for a rally in Forest Hills on Sunday to denounce anti-Semitism amid after a series of attacks on Jewish people in the city and in surrounding communities in recent weeks.

“As Jews we are the canary in the coal mine for any society that is starting to fail,” said organizer Jeff Kohn. “Today it is the Jews, but that virus of hate will not stop us.”

The rally at MacDonald Park alongside Queens Boulevard was prompted by a rash of attacks on Jewish people in New York City, as well as a machete attack on a Hanukkah party in Rockland County and a deadly shooting at a kosher market in Jersey City last month.

Bishop Paul Sanchez from Our Lady Queen of Martyrs Roman Catholic Church in Forest Hills said everyone is hurt by attacks on members of the community.

“Any act of hate or anti-Semitism against one person is an act against all of us,” Sanchez said.

A couple of hundred people gather in Forest Hills to denounce antisemitism and call for unity. #1010WINS pic.twitter.com/6FnFoWfNpl

Rabbi Mark Kaiserman from the Reform Temple of Forest Hills brought members of his congregation to the rally.

“We stand against anti-Semites and attacks on any group that seeks to marginalize or hurt or harass others for being different,” Kaiserman said.

One attendee, Mark, told 1010 WINS’ Roger Stern that he was worried about the increase in anti-Semitic crimes, and he said he doesn’t believe politicians are doing enough to stop it.

“It seems to be going unchecked,” he said.

Cynthia Zalisky, the executive director of the Queens Jewish Community Council and a descendant of Holocaust victims, said the community must be vigilant.

“My grandfather said, ‘It will blow over. Everything will be fine,’” she said. “He died in Dachau.”

The rally came a week after thousands crossed the Brooklyn Bridge in a show of support for the Jewish community.