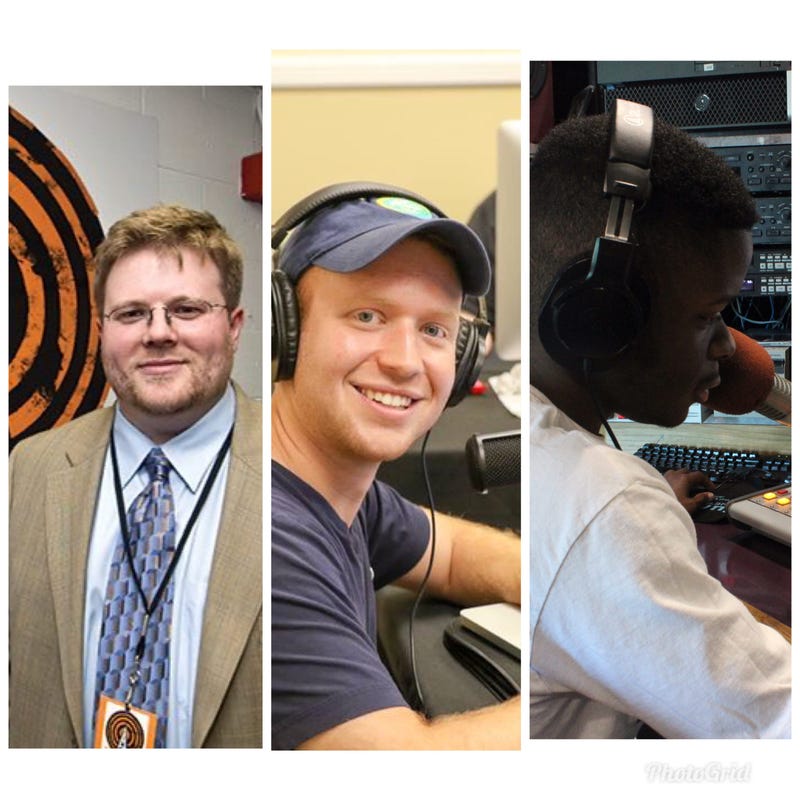 When Tim Heath was given the opportunity to announce hockey in the 1980s at Boston University, he knew he couldn’t pass it up.

"I would go to the game anyway, and I wanted to be a broadcaster, so I said, ‘Gee, why not work for the student radio station, and I could have the best of both worlds?’" he told 1010 WINS ahead of the ninth annual College Radio Day on Friday.

He understood he would only be heard by a handful of people: After all, in 1984, the school's station, WTBU, transmitted over carrier current, which meant the signal ran through phone lines into dormitories on campus, and a small transmitter in each building allowed students to tune in to the station on 640 AM. Leave the building, and the signal quickly turned to static. But that didn’t matter much to Heath.

"It didn’t really bug me that there weren't a lot of people listening," he said. "It didn’t deter the enjoyment and professional development I got out of the experience."

That’s not to say WTBU represented the majority of college radio stations at the time. Some operated on stronger transmitters. Across Boston, Emerson’s WERS transmitted at 900 watts. In Atlanta, Georgia Institute of Technology’s WREK screamed across the city at 40,000 watts.

Stations are no longer at the mercy of the strength of their transmitters. Streaming sites such as TuneIn and Mixlr now allow them to reach a theoretically unlimited audience. Though students are able to broadcast to more people than ever, the goal of college radio remains the same: Provide opportunities for students to learn, practice, develop themselves professionally, and have fun.

Dr. Rob Quicke is a professor of communications at William Paterson University in Wayne, New Jersey, and he oversees the school's station, WPSC. To say Quicke is enthusiastic about college radio is an understatement. Before he came to the U.S., he was a student at Oxford University, where he founded the U.K.’s first FM college station in 1997. In 2011, he noticed there wasn’t an event that unified the countless campus stations across the US, so he decided to create one himself:

Since its inception nine years ago, participation in College Radio Day has grown to nearly 500 stations in 30 countries. There’s no official agenda for participating stations to follow. Some will bring in local acts to perform live. Others will use the day to fundraise for charities. But according to Quicke, the main focus of the event is to draw awareness.

"It's an opportunity for everyone to be reminded of the fact that (college radio) never went away, and actually, we’re still doing really great stuff."

Quicke is keen to note that many students involved in college radio aren't interested in a broadcasting career. He says even those who casually participate see improvement in their communication skills and self confidence. But for the students who want to wind up in professional radio or TV, participation in college radio is important:

"In terms of those students who really do want to go into radio or television one day, it’s really the perfect training ground, because it will give them exposure to the equipment, to the standards, and the professional environments that eventually they’ll walk into as professionals once they graduate and go into the industry," Quicke said. "So college radio itself is a really, really important medium because it allows students to find their own voices, quite literally sometimes, and to express their views, express their opinions, grow in their communications skills and really develop as a person." 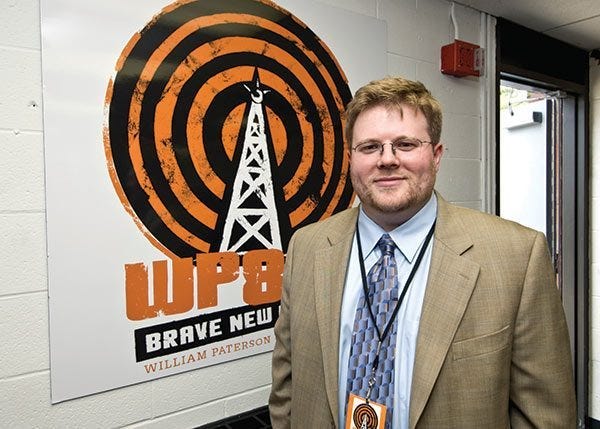 Seton Hall’s WSOU is participating in College Radio Day this year. The station is well known for its coverage of the school’s Division 1 basketball teams, but it also features unique music programming and news coverage throughout the day. Wilnir Louis is a junior sports management major, and in May he took over as WSOU’s student station manager.

Before enrolling at Seton Hall, Louis didn't know he wanted to be a broadcaster. But he was a sports buff, and he liked to watch ESPN and listen to 1010 WINS' sister station, WFAN.

When Louis began his higher education, he was attracted to the opportunity WSOU gave him to broadcast sports. He was initially unsure of the metal music the station featured, but he decided to stick with it, and early on realized he was having a lot of fun and making a lot of friends:

Louis believes his willingness to make himself available was a factor in him becoming station manager as a junior. Though he still has over a year to enjoy college life, he's interested in pursuing a career in broadcasting. He estimates he spends 25 hours a week at the station, but says being there never feels like a chore: "I've been passionate and I've been blessed with this opportunity, and I've realized that this is fun." 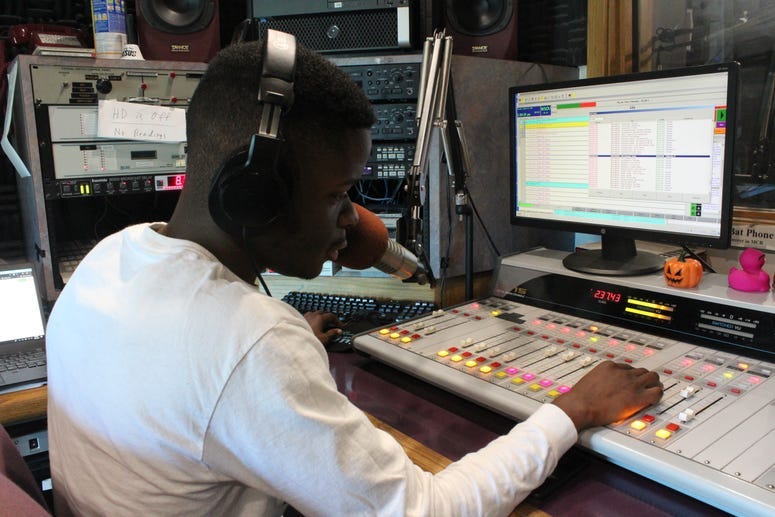 Just a week into his first semester at Ithaca College, Jake Asman became a sports update reporter on the school’s two radio stations, VIC and WICB. Throughout his four years, he saw himself co-hosting a sports talk show and calling play-by-play for the football team. The highlight of his college radio career came in February of his senior year. He and his longtime co-host Dan Budick represented Ithaca College on Radio Row at Super Bowl LI in Houston and spoke to athletes and celebrities.

Asman equates working on college radio to being in a laboratory, where he was allowed to experiment, and if he made a mistake, he could just try again. It was low-stakes environment where he could get valuable feedback from advisors and peers. But he says it's the lifelong connections he made that he appreciates most:

After graduating, the Syosset native worked briefly as a board operator at WFAN and CBS Sports Radio in New York before accepting a full-time offer as a host on SB Nation Radio and moving to Texas. 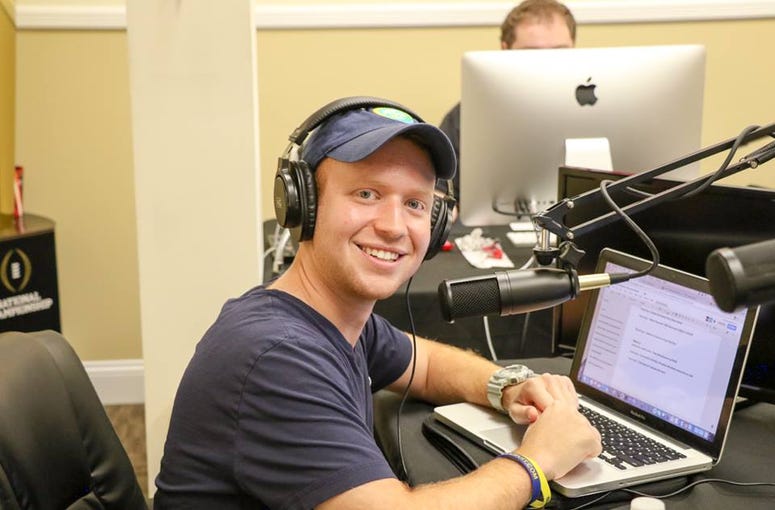 The landscape of college radio looks a lot different now than it did 35 years ago when Heath covered hockey in Boston. The internet allows listeners to follow stations from the other side of the world. CD and record libraries shrink as their contents are digitized. But opportunities for aspiring broadcasters are still there. And as students join their campus stations, they realize how much fun they can have and how many friends they can make along the way.

The ninth annual College Radio Day is Friday, October 4. It is organized by College Radio Foundation. A list of participating stations is available at collegeradio.org.