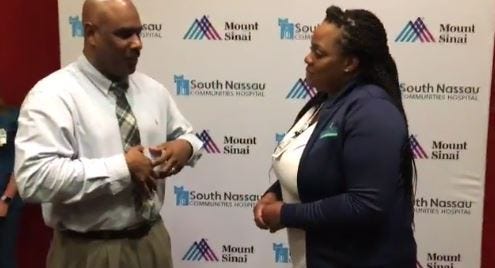 LYNBROOK, N.Y. (1010 WINS) -- A Long Island man has been reunited with the quick-thinking nurse who's credited with saving his life.

DeShawn Mason and his 7-year-old grandson had just settled into their seats at the Lynbrook Multiplex when he slurped on a Slurpee -- instead of getting brain freeze, his heart froze, and his breathing changed.

'Agonal respiration' better known as gasping, is a sign of a impending heart attack.

"As I leaned down I noticed he was just covered in sweat, and I tried to arouse him and I said, 'sir are you okay?' And he didn't respond," she said.

She immediately started CPR. Without her help, Dr. Lawrence Cantor said Mason probably wouldn't have made it.

"Outside of a hospital, your chance of surviving is very poor, less than 5 percent," he said.

Nurse Shyvonne Allen skipped Easter Mass to take her son to Shazam! DeShawn Mason was at the Lynbrook multi-plex with his grandson.....when he went into cardiac arrest...she administered life-saving CPR! #1010WINS @SouthNassauCommunitiesHospital pic.twitter.com/VSk0oeXjxZ

Mason said the last thing he remembered was drinking the Slurpee, and then waking up in the hospital.

The Easter Sunday movie they were watching 'Shazam!' is about the hero inside. In this case, the hero was inside of the theater.