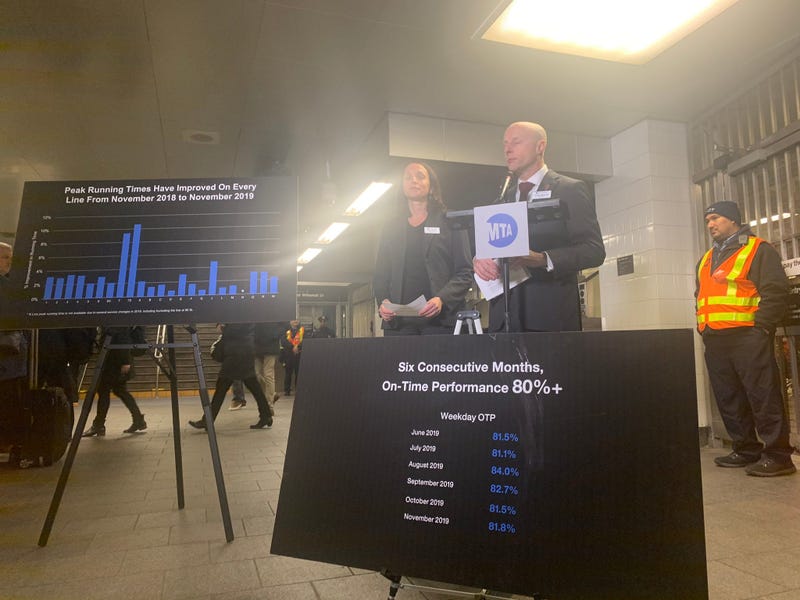 According to the MTA, their running times are faster on every line in November 2019 compared to a year ago.

Data available from recent tech advancements show that stats showed that the time it takes for trains to go from terminal to terminal has improved on every line compared to 2017 and 2018.

"The data doesn’t lie: subway service is demonstrably better, more customers are taking the subways, and the service continues to improve each month thanks to the hard work of our employees and smarter operations," said MTA Chairman and CEO Patrick J. Foye. "I am proud of everyone at New York City Transit for their dedication and laser focus in improvements that have yielded these results that prove our subway service has truly turned around."The Save Safe Seconds Campaign was launched in 2018 as part of NYC Transit President Andy Byford’s Fast Forward Plan directive to improve subway service, by focusing on the root causes of delays.

Management of day to day train operations, including the repair of faulty speed-regulating signals, increase of speed limits and new instructions to train operators, allowed for trips to take less time for customers.

The ‘running times’ metric uses new technology to better track the locations of trains in large parts of the subway system.

For the sixth straight month, weekday on-time performance in November went up 17 percent to reach 81.8 percent from November 2018 and subway ridership are on the upswing, by one measure, breaking a three-year record.

The only train without improvement was the N train.

"I am hugely encouraged by the consistent and sustained improvements we are seeing across all subway performance metrics, reflecting significantly improved service for our customers," said Sally Librera, MTA NYC Transit Senior Vice President for Subways. "By improving our ability to measure service in different ways, we are now able to better pinpoint areas for improvement, as well as identify gains being made, such as the improving run times through the system meaning customers are getting where they need to go faster.

Weekday Major Incidents decreased 49.3 percent from November 2018, dropping from 67 to 34 in November 2019 and weekday train delays decreased 42.5 percent from last November, from 51,964 to29,863.A contributing factor to the reduction in delays has been the Subway Action Plan. The plan has shown significant progress made in reducing track debris fires, which are significantly down since NYC Transit started attacking this problem with new equipment in 2017.

This has included clearing debris at an unprecedented rate using new platform-based mobile vacs, and vacuum trains that move around the system picking up trash.

More than 83 percent of customers completed their journeys within five minutes of the scheduled time, compared to 79.2 percent last year, the MTA announced.

"This new metric we’re talking about today, running times, is yet another meaningful way to quantify what the 50,000 employees of New York City Transit have been working so hard to achieve: months of sustained improvement in service," said MTA NYC Transit President Andy Byford. "We have much more work to do to deliver the service that New Yorkers need and deserve; the consistency that we have achieved shows the Subway Action Plan and the Save Safe Seconds campaign laying a strong foundation for the major improvements we expect from upgrades that are part of the next MTA Capital Plan."

Even more precise information about train movements is expected with each line that is newly outfitted with modern computer-based signaling systems – a major component of the current and next MTA Capital Plan.Like 1010 WINS on Facebook and follow @1010WINS on Twitter to get breaking news, traffic, and weather for New York City.