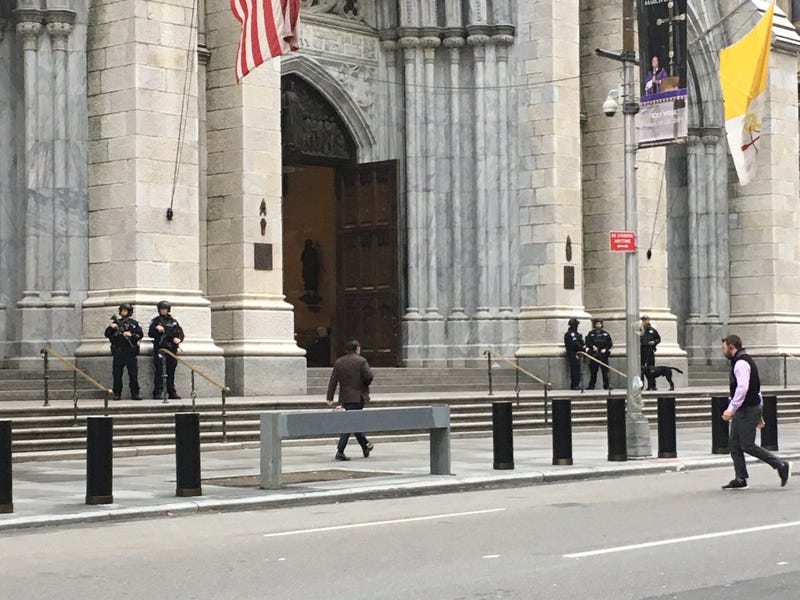 NEW YORK (1010 WINS) -- Days after a fire swept through Notre Dame in Paris, a 37-year-old man from New Jersey was arrested after walking into St. Patrick's Cathedral Wednesday night with four gallons of gasoline, two cans of lighter fluid and lighters, the NYPD says.

Lamparello reportedly bought a one-way ticket for a Thursday evening flight from Newark to Rome, according to Fox 5. He was also arrested earlier this week at Sacred Heart Cathedral in Newark.

Police say the Lamparello was spotted and stopped by cathedral security, who notified the NYPD.

Deputy NYPD Commissioner John Miller said the man claimed he had run out of gasoline and was cutting through the church to reach Madison Avenue.

Miller went on to say the suspect's story did not add up.

"His basic story was he was cutting through the cathedral to get to Madison Avenue, that his car had run out of gas. We took a look at the vehicle, it was not out of gas," Miller said.

Lamparello was subsequently taken into custody.

"The totality of circumstances of an individual walking into an iconic location like St. Patrick's Cathedral carrying over four gallons of gasoline, two bottles of lighter fluid and lighters is something that we would have great concern over," Miller said.

St Pat’s suspect is being treated as an emotionally disturbed person. His intentions were not immediately clear but two days from Notre Dame fire police source noted “timing is odd” https://t.co/n4N5ynIeli

Federal agencies are assisting in the investigation including the counter-terrorism bureau and the FBI's joint terrorism task force.

The NYPD says there were was no damage to the cathedral and no injuries were reported.

Lamparello's father was distraught at word of his son's arrest, the Daily News reported, calling it 'extremely out of character.'

"He's a brilliant professor. His writings -- other professors can't even understand his writings," he said.

Lamparello is a CUNY student working on a PhD in philosophy, the Daily News reported. He's worked as a lecturer at Lehman College and has taught at Brooklyn College as well.

Around 7:55pm, a man walked into St. Patrick’s Cathedral in Manhattan with gas cans and lighter fluid, and was subsequently apprehended by @NYPDCT without incident. We thank our partners for their help, and remember - if you see something, say something. pic.twitter.com/qEbmklnqzQ

The arrest comes just days after a massive fire swept through Notre Dame Cathedral in Paris and during Christianity's holiest week.

St. Patrick's Cathedral was built in 1878 and has installed a sprinkler-like system during recent renovations. Its wooden roof is also coated with fire retardant.