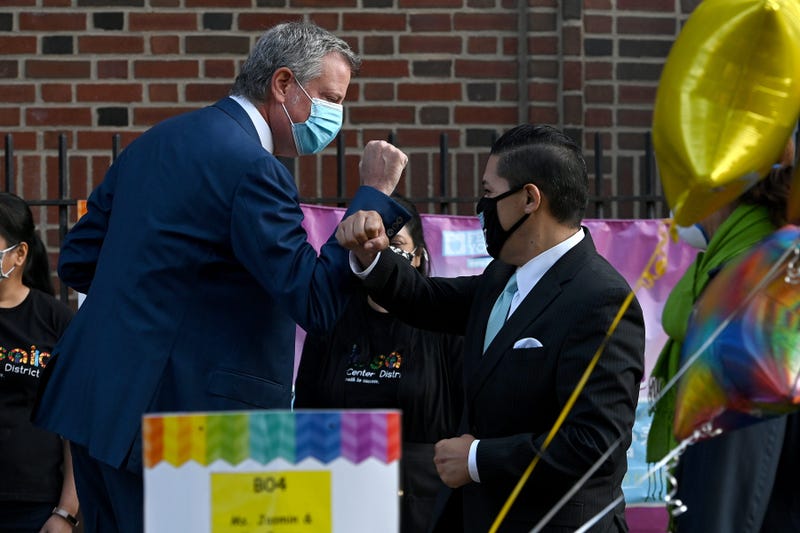 NEW YORK (1010 WINS) -- Gov. Andrew Cuomo on Monday said New York state would "act on the data" before it steps in to take over the reopening of New York City schools — a day after a union representing the city's principals called on Mayor Bill de Blasio to cede control of the city’s schools after issuing a unanimous vote of “no confidence” in him and Schools Chancellor Richard Carranza over their school reopening plan.

In a statement Sunday, the executive board of the Council of School Supervisors and Administrators said it “declared a unanimous vote of ‘No Confidence’ for Mayor de Blasio and Chancellor Carranza due to their failure to lead New York City through the safe and successful reopening of schools.”

The union, which represents over 6,400 members, wants de Blasio to hand over control of the schools and the state to intervene.

“CSA calls on Mayor de Blasio to cede mayoral control of the Department of Education for the remainder of this health crisis and for Mayor de Blasio and Chancellor Carranza to seek the immediate intervention of the New York State Education Department,” the union said.

Asked about the possibility that the state could step in to make a decision regarding New York City schools, Cuomo on Monday said he and the health department would “act on the data.”

“We want to get (students and teachers) back into school, but we want to do it safely,” he said. “I get the concern of the principal’s union, and we’re watching the numbers closely.”

The union's announcement came a day before most students who opted for in-person learning will return to classrooms.

“School leaders want school buildings reopened and have been tirelessly planning to welcome back students since the end of last school year,” CSA President Mark Cannizzaro said. “They must now look staff, parents, and children in the eye and say that they have done all they can to provide a safe and quality educational experience, but given the limited resources provided them, this is becoming increasingly difficult. During this health crisis, school leaders have lost trust and faith in Mayor de Blasio and Chancellor Carranza to support them in their immense efforts and provide them with the guidance and staffing they need. Quite simply, we believe the City and DOE need help from the State Education Department, and we hope that the mayor soon realizes why this is necessary.”

In a conference call with reporters Sunday, Cannizzaro said, “All summer long, we’ve been running into roadblock after roadblock, with changing guidance, confusing guidance — often no guidance.”

Cannizzaro stopped short of saying a strike was on the table. “We’re right now in the middle of a pandemic. Our kids need us,” he said.

The mayor has twice delayed the start of in-person classes and most of the city’s 1.1 million students have started the school year remotely. Elementary school students are set to return to classrooms Tuesday, with middle and high school students returning on Thursday.

Earlier in the summer, the teachers union said schools weren’t ready to open because of safety issues such as outdated ventilation systems and lack of school nurses. But after most of its safety demands were met, the union now supports the city’s reopening plan.

The principals union has warned of a major staffing crisis created by a deal in August between the de Blasio administration and the United Federation of Teachers that mandated schools create three groups of teachers — one to handle all-remote students, another to teach hybrid students in the classroom and a third to teach hybrid students at home. On Friday, the city made another agreement, allowing more teachers to work from home if they’re teaching students learning at home.

In a statement the Department of Education said: "For the past six months, we’ve worked with our labor partners to navigate completely uncharted waters and accomplish our shared goal of serving students this fall. We’ll continue this work to guarantee a safe, health and successful opening for all. This week, more kids will be safely sitting in New York City classrooms than in any other major American city — a testament to city leadership and our educators’ commitment to their students, and the importance of in-person education."