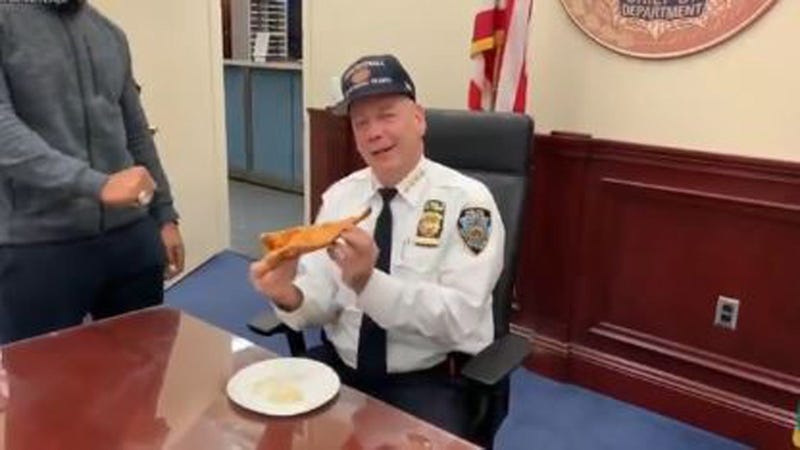 The Police Pizza War is heating up on social media months before the NYPD and Chicago PD go head to head in a football game where the loser will have to dig into the opposing city's preferred pie.

The Windy City threw down the gauntlet Thursday with a tweet raving about deep-dish pizza and dissing New York thin crust.

Saturday is #NationalPizzaDay. How will you celebrate, Chicago? Deep dish, or ol’ fashioned thin crust? Either choice beats New York-style slices. Like/RT if you agree. pic.twitter.com/WxLAxnMsCr

“It’s like a casserole,” Chief of Department Terence Monahan told 1010 WINS’ Juliet Papa on Friday. “You have to get pizza from New York. It’s the only place where pizza originated, and that’s real pizza.”

.@Chicago_Police, let’s finally settle this! On May 18, @FinestFootball takes on Chicago. When we win (again), Superintendent Eddie Johnson eats a slice of NY🍕& admits it’s better. If you win, I’ll eat my words & a slice of that casserole you call pizza🤢 https://t.co/gPi1Aq37k8

“If you win, I’ll eat my words & a slice of that casserole you call pizza,” Monahan tweeted.

Monahan followed up Saturday with video of him dismissing Chicago deep-dish and digging into a New York slice.

“New York pizza -- a lot better than Chicago!” Monahan says in the video.

Sorry, @Chicago_Police, there’s no doubt in my mind that the best pizza is from NY. But we have good news for you. When @FinestFootball wins on May 18, the @CPDEnforcers will have a great meal. See you then! #NationalPizzaDay pic.twitter.com/F9cWl8WvZz

The Pizza Bowl will be held in New York on May 18.