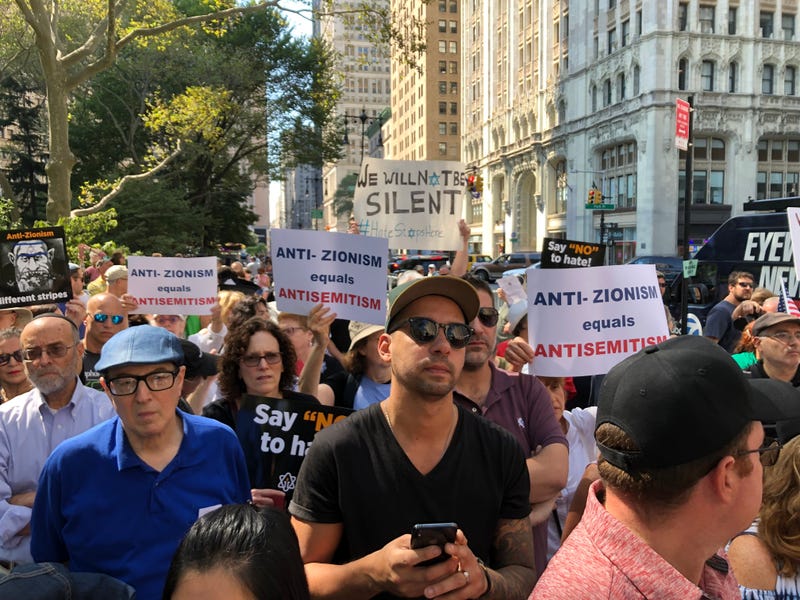 NEW YORK (1010 WINS) – Dozens of people converged on City Hall Park on Sunday for a rally condemning anti-Semitic attacks that have been increasing dramatically in New York.

Demonstrators slammed politicians, the media and even fellow Jews for not caring more about the hateful incidents.

“I’m asking the mayor to declare a state of emergency here in New York with regard to anti-Semitism,” Hikind said.

Some more photos of today’s rally against antisemitism in NYC. pic.twitter.com/Cd8aLrI50w

The NYPD says anti-Semitic hate crimes are up 63 percent this year compared to 2018 and that more than half of hate crimes committed in New York City are against Jews.

While the majority of the crimes are acts of vandalism, like scrawled swastikas, there has also been violence, including a 63-year-old Jewish man who was attacked with a brick while running in Brooklyn.

“Attacks on Jews are more numerous than all other racial attacks,” Hikind told demonstrators.

Many at the rally criticized de Blasio for what they say is a lack of interest in the issue and a tendency by the mayor to paint it as a right-wing problem.

Thank you to EVERYONE who took our msg to heart and showed up! And thank you to all the partner orgs who put their time and effort into making this rally against antisemitism a resounding success.

And as long as Jews are being attacked we will never be silent! pic.twitter.com/pptLosMboV

Morton Klein, of the Zionist Organization of America, said politicians care less about attacks on Jews than on other minorities.

Borelli said “most of the violent incidents against Jews in New York City are by black men.” The remark prompted another speaker to defend the black community, saying “they don’t want this.”

1010 WINS has reached out to Mayor de Blasio’s office for comment.