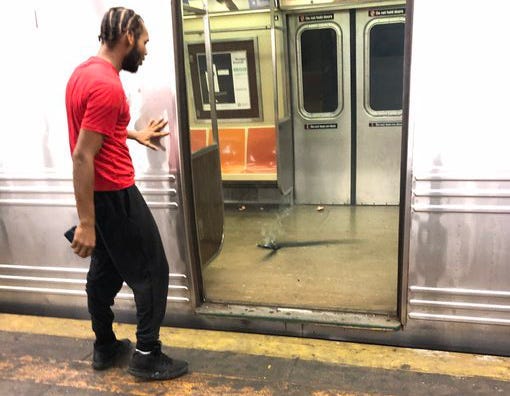 A photo captured by rider Shannon Lynch shows the man looking back at his smoldering device on the scorched floor of the subway car, which he and others had just rushed out of in a panic.

Lynch says the train was arriving at the High Street station in Brooklyn around 2 p.m. By the time the doors opened, the phone was ablaze.

“I didn’t really see what was happening until it was on fire,” Lynch told 1010 WINS Saturday. “He just kind of flipped out and tossed it onto the ground.”

“It was in flames. The whole car just rushed off onto the platform,” she said.

This dude’s phone literally just caught fire in his hand on the A train. Full car sprinted off before it went up in smoke. You never know what you’re gonna see in New York, man. #MTA pic.twitter.com/duNBqZXzT6

Lynch said she and others were calling down to MTA workers to let them know that the train car was filling up with smoke.

She said the man then went back into the car to kick his smoldering phone onto the platform.

“By this time it had mostly stopped smoking and being on fire,” she said.

But the fiery phone gave everyone in the car a good jolt, Lynch says.

“I think most people couldn’t see what was in his hands and just saw like something go up in flames and be on fire, so the rush off the train was just like one of the craziest things I’ve ever seen,” she said.

She said the man didn’t appear injured, just “shaken up.” It was hard for her to tell the type of phone it was because it was “melted.”

She said she’s just thankful the phone didn’t combust while they were in the tunnel between stations.

“Not sure what we would have done,” she said. “It brought smoke into the entire car.”