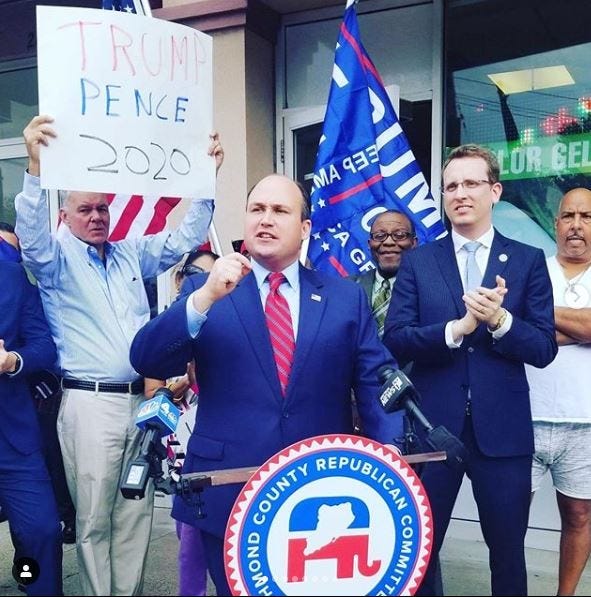 Rose -- a veteran who beat GOP incumbent Dan Donovan by more than 10,000 votes in November's election -- last week announced he was in favor of an impeachment probe into President Donald Trump.

“The president won this district by almost 11 percentage points, the people of Staten Island and Brooklyn and this district spoke loud and clear, (Rose) is going to face a wrath of those constituents next November, mark my words,” Langworthy said to a crowd that carried signs including "Hey Max, what about us? SI 57%" and "Trump Pence 2020."

Langworthy also wrote on Instagram, "We kicked off our statewide 'Stop the Madness' tour today at Max Rose’s Staten Island congressional office. Staten Island is fired up to send their flip flopping congressman packing. This district is Trump Country!"

Lantry implied at the protest that Rose is akin to progressives like congresswomen Alexandria Ocasio-Cortez and Ilhan Omar: "Instead of focusing on doing his job and focusing on the important issues like improving our infrastructure, making New York competitive despite oppressive taxes and regulations, or lowering the cost of prescription drugs, Max fell in line with the most radical elements of the Democratic Party."

Rose defended his stance on Monday: "I didn’t fight our enemies overseas so that our leaders would invite them to interfere in our elections back home. It’s disappointing to see the Republican Party put China and Russia ahead of America. My job is to get the facts, not play politics — and that’s exactly what I’m going to do."