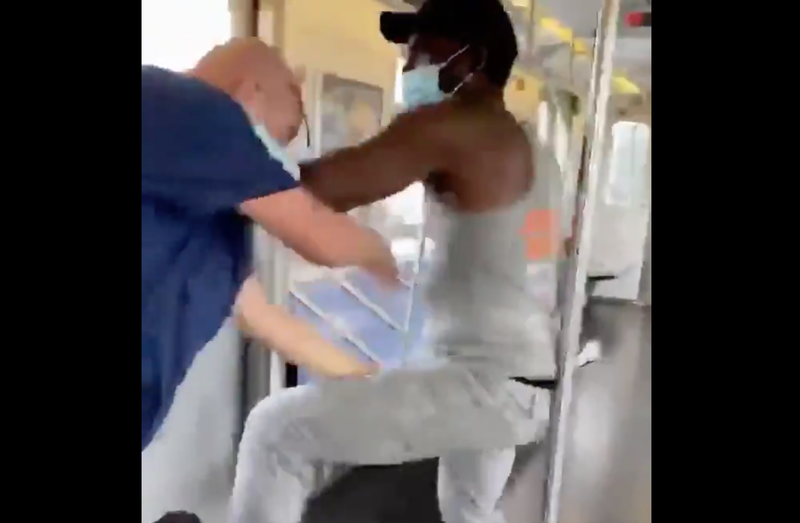 Warning: The video below is disturbing and graphic.

NEW YORK (1010 WINS) – Terrifying video shows two men in their 70s being attacked by a knife-wielding stranger aboard a 7 train in Queens, police said.

Guess it’s no longer safe to ride the subway in NYC and I’m not referring to COVID...
pic.twitter.com/wMdEDtUt4R

The two victims, ages 71 and 73, were riding the train through Woodside around 7:30 a.m. on July 5 when they were attacked by a man sitting across from them at the 52nd Street station, police said.

“Why aren’t you home with your kids?” the suspect shouted before attacking, police told the New York Post.

Video shows the man swinging a knife at the two men as they fall to the ground and a woman screams in the background.

Both of the men were stabbed during the attack, police said. They were taken to Elmhurst Hospital in stable condition.

Police arrested Patrick Chambers, a 46-year-old from the Bronx, a short time later. He was charged with two counts each of assault, menacing and criminal possession of a weapon.

NYPD Transited retweeted the video Saturday, calling it a “heinous and unprovoked attack.”

A heinous and unprovoked attack- The suspect was arrested moments later, charged with multiple counts of felony assault, menacing, and criminal possession of a weapon, and is currently awaiting prosecution https://t.co/kbQBhWungK