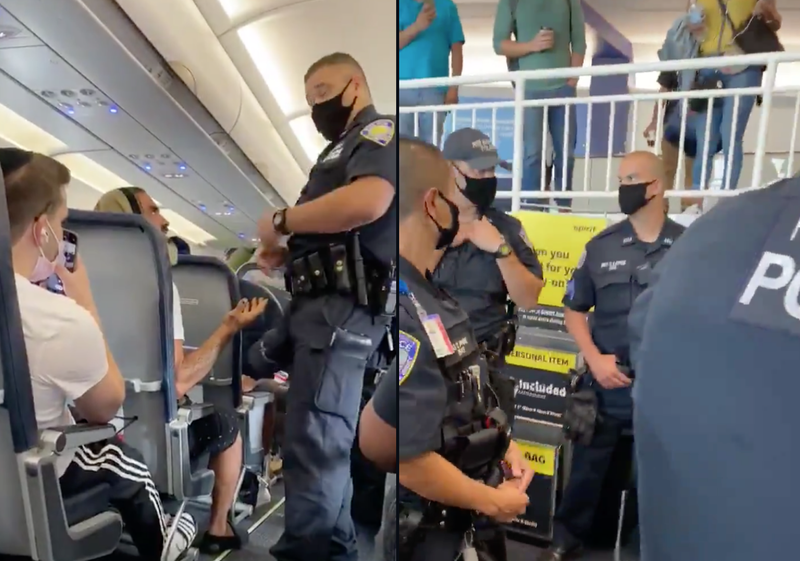 NEW YORK (1010 WINS) – A man was forced off a flight heading from New York to Florida on Friday after he wouldn’t put on a face covering, airline officials said.

The man was aboard a Spirit Airlines plane heading from LaGuardia to Fort Lauderdale, when officials said he refused to wear a face covering and police were called.

Video posted to Twitter Friday afternoon shows the man speaking with a Port Authority police officer while seated aboard the plane.

Breaking from a friend: on a @SpiritAirlines flight @LGAairport to @FLLFlyer #fortladerdale this man refuses to wear a Face Covering - man being #arrested for unruly behavior (Video: copyright) #WearAMask pic.twitter.com/eJQo1toQXW

The officer appears to tell the man, “They’re telling me… that you got in their face a little bit.”

“Did I get in anybody’s face?” the man responds. “I didn’t get in nobody’s face. I’ve been sitting here waiting for you to come.”

“Let this man fly,” another passenger can be heard saying, adding, “That’s racism.”

“Let this man fly. Why can’t he go home?” the passenger says.

“I’m going home to see my father who had a stroke,” the man tells the officer.

“I’m asking you, what would you like me to do?” the officer responds.

“I’d like to stay on the flight,” the man says.

“I can’t force them to let you stay on the flight,” the officer responds.

The man eventually says, “I’m staying on the flight.” However later video shows the man at the boarding area surrounded by Port Authority police.

Update: The man refusing to wear a face cover on the @LGAairport @SpiritAirlines Flight to Fort Lauderdale @FLLFlyer is now being arrested @nbc6 - the passengers had to get off the plane. #WearAMask pic.twitter.com/kmbuJ0RR0f

Spirit Airlines released a statement about the incident, saying authorities were called after the man wouldn't put his face covering on.

“Spirit Airlines asked police to intervene after a man boarded flight NK197 from LaGuardia to Fort Lauderdale, took off his face covering and refused to put it back on,” a spokesperson for the airline said.

“Ultimately, the man chose to deplane on his own instead of risking legal consequences,” the spokesperson said.

The statement continued: “Spirit will always err on the side of caution when it comes to the health and safety of our Guests. Wearing a face covering is simple, it’s easy, and it’s critical to Spirit and the airline industry as a whole. We thank the thousands of Guests and Spirit Team Members who do their part each day to protect each other, and we will continue to enforce the use of face coverings on board our aircraft.”

1010 WINS has reached out to Port Authority police but has not yet heard back.