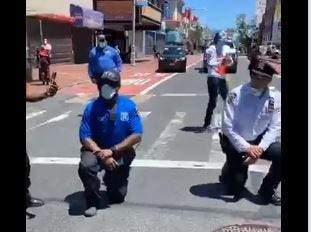 NEW YORK (1010 WINS) -- Several NYPD officers took a knee this weekend at demonstrations across the city protesting the death of George Floyd in Minneapolis police custody.

Kneeling on one knee is a public act of protest, especially in a situation where most others are standing. Currently it's to protest protest brutality against people of color.

In one video posted to Facebook, at least three officers are seen kneeling at a protest in Queens at the intersection of Jamaica Avenue and 165th Street. The response from the crowd? Clapping and cheering.

The officer then joined protesters in reading the names of black people who have been killed by police, following by a round of hugging.

In Foley Square, resounding chants of “NYPD take a knee.” Eventually, four cops kneel to huge chants. “We just want to get home safely, same as you,” says one protester. pic.twitter.com/6eRC4h9L0Q